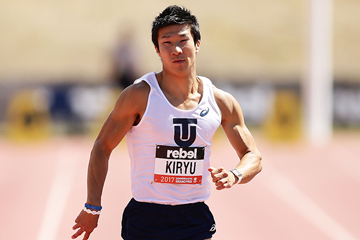 Yoshihide Kiryu and Ryota Yamagata – two members of Japan’s silver medal-winning 4x100m team in Rio – ran the fastest three times in Canberra history in the men’s 100m at the Summer of Aths meeting on 11-12 March.

Australia’s Ella Nelson, Morgan Mitchell and Keely Small produced some of the other top performances across the two-day meeting at the Australian Institute of Sport Track and Field Centre as several qualifying times for the IAAF World Championships London 2017 were achieved.

The men’s 100m on the first day of the meeting was run as a seeded event, but visiting Japanese sprinters Yamagata and Kiryu opted to run twice to take advantage of the warmer afternoon conditions.

Kiryu missed the start in the final later in the evening, leaving Yamagata to win unchallenged in 10.08 (-0.1m/s) from Kiryu (10.19), New Zealand’s Joseph Millar (10.24) and Josh Clarke (10.32). Between them, the two Japanese sprinters notched up the three fastest times run in Canberra.

Some of the biggest cheers of the weekend, though, were reserved for Ella Nelson in the women’s 200m.

Nelson was one of the big improvers in Australian athletics last year, emerging from the pack to within one hundredth of a second of making the Olympic 200m final. Having put herself up alongside sprint legends such as Melinda Gainsford-Taylor, Cathy Freeman, Denise Boyd and Raelene Boyle in 2016, Nelson started 2017 in similar fashion with a win over 200m on Sunday.

Competing on the same track where she made her first breakthrough last year, Nelson opened her season with a 23.00 (1.5m/s) win, ticking off the first box on the way to London with a World Championships qualifying time and setting herself up for selection in the team after the Australian Championships in Sydney on 30 March-2 April.

Just returned from a stint at the Altis Training Centre in Phoenix, Arizona, she was pushed hard most of the way by Papua New Guinea’s Toea Wisil, who set a national record of 23.13 in second place.

“I was so nervous,” Nelson said. “My two biggest fears are flying and opening up my season and I’ve done both this week. I’m glad to have ticked the box, got the qualifier.

“I try to trick myself into thinking that I haven’t just flown long haul, but I’m not sure how that is going because that was hard. Hopefully, by the [Australian] Championships I’ll be settled in and ready to run a fast time.”

There was a shock of the pleasant kind in the women’s 800m when 15-year-old Keely Small slashed more than three seconds off her previous best in winning in a world age-15 best of 2:01.46. Her time also broke 2000 Olympian Georgie Clarke’s Australian U18 record.

Morgan Mitchell, like Nelson a semi-finalist in Rio aiming to progress one step further in London, produced her fastest 400m on Australian soil when she won on Saturday night in 51.65. Lauren Wells also excelled in the one-lap hurdles, taking victory in her home town in a time of 55.97.

In the 100m hurdles, Michelle Jenneke built off a strong start to lead Brianna Beahan all the way to win in 12.99 (1.5m/s) to 13.18. She said she will now freshen up for the national championships where 2012 Olympic champion Sally Pearson is expected to race.

Hamish Peacock was again beyond 80 metres in winning the men’s javelin with a best distance of 80.01m. His Rio teammate Kelsey-Lee Roberts won the women’s event with a distance of 60.96m, just short of the 61.40m qualifier for London.

Olympic fourth-place finisher Dani Stevens (nee Samuels) was again in fine form in the discus on the first day of the meeting. Having opened her season with a 66.78m two weeks earlier, this time she won with 64.79m.

Blustery winds blew just right for some and just too right for others in the horizontal jumps. Chris Mitrevski, an emerging long jumper coached by John Boas – mentor to 1984 Olympic silver medallist Gary Honey and 1991 World Championships and 1992 Olympic finalist Dave Culbert, among others – had his first eight-metre jump with a windy 8.05m (2.7m/s) and a wind-legal personal best of 7.97m. 2014 World U20 Championships representative Naa Anang won the women’s event with a personal best of 6.65m (1.2m/s).

In a race which copped the worst of the blustery conditions on Sunday afternoon, Linden Hall beat her fellow Olympic semi-finalist Jenny Blundell in the 1500m in 4:12.33.