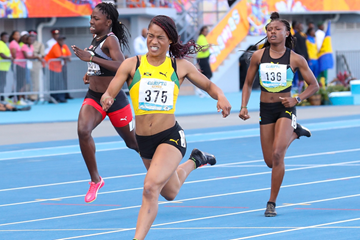 After topping the medals table with 44 gold, 27 silver and 11 bronze medals, Jamaica maintained their stronghold on the Carifta Games at the 47th edition of the event in Nassau from 31 March until 2 April.

This year’s staging was attended by IAAF President Sebastian Coe, who stated at the opening ceremony that the Carifta Games is now a staple on his calendar. IAAF Vice President Alberto Juantorena, NACAC President Victor Lopez, IAAF council member Pauline Davis-Thompson and JAAA President Warren Blake were also in attendance.

World U18 leader Briana Williams was the top performer of the championships and was given the Austin Sealy Award after bagging three gold medals for Jamaica.

“My start was fine but my transition was a bit hurried, I could have stayed down a little longer,” said Williams. “The ending was rough for me because I was trying to run a certain time. I’m proud of myself still.”

Williams ran the opening leg on Jamaica’s 4x100m team, helping them to gold and a championship record of 44.95. On the final day of the championships, she completed her sprint triple by winning the 200m in a lifetime best of 23.11 (1.1m/s).

“It feels amazing, because I know I worked hard for this to dominate at Carifta,” said Williams.

Jamaican sprinters nearly swept all of the 100m titles until Joel Johnson of The Bahamas interrupted their flow. The 17-year-old won the U20 men’s event in a PB of 10.31 (1.1m/s). Johnson’s teammate Adrian Curry (10.43) edged Rikkoi Brathwaite (10.46) from the US Virgin Islands for second place.

“I was very confident coming into the final,” said Johnson. “I had the fastest time so I wasn’t worried about anybody besides myself. I executed my race like my coach said and I am thankful that I came out with the gold medal.”

In the U20 boys’ 200m final, Johnson lined up against 2015 world U18 400m champion Christopher Taylor, winner of three Carifta 400m titles from the past three years. The Jamaican, stepping down in distance, won comfortably in 20.38 (1.1m/s), just 0.03 shy of the lifetime best he set recently in Kingston. Johnson was a distant second in 20.90.

“I was really comfortable knowing that I came out here with the expectation to win but never expected to run that fast,” said Taylor. “It shows I’m training well and consistent at 20.3.”

The decibel level from the expectant crowd went up several notches prior to the start of the 400m finals. Bahamian Megan Moss did not disappoint as she retained her U17 girls’ 400m title in a lifetime best and championship record of 53.19.

“I was so excited to perform in front of my home crowd,” said Moss. “I just wanted to repeat my gold medal performance from last year in Curaçao and this time around it was totally different.”

Jamaican athletes may have only won one of the four 400m flat titles on offer, but they swept all of the 400m hurdles finals and the sprint relays.

Jamaica fittingly brought the curtain down on the games with a thrilling display in the U20 men’s 4x400m as Taylor anchored the team to victory in 3:06.62, almost two seconds clear of runner-up Barbados (3:08.31).

The 1500m finals for all age groups were the first track events contested on the opening day and Jamaican runners swept them all.

In a tactical U20 men’s final, Jamaica’s Javon-Taye Williams out-sprinted Evan Jones of the US Virgin Islands to win in 4:02.02.

Shaquena Foote, Rushana Dwyer and J’Voughnn Blake were the other Jamaican winners over 1500m.

Pole vaulter Baptiste Thiery cleared 5.05m to set a Games record. Although the record will stand, the performance was classed as an exhibition because only three athletes from two countries entered the contest. Under Carifta rules, at least five athletes from three countries constitute a legitimate contest.

Elsewhere, Jamaica’s Shantae Foreman came from the brink of elimination to take the U17 girls’ high jump title with a clearance of 1.74m, while team-mate Roje Stona won the U20 men’s discus with a season’s best of 63.77m.