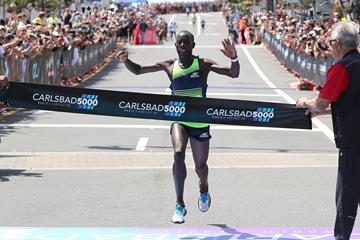 The multiple NCAA champion was an emphatic winner. He blitzed through the first two kilometres in 5:04 and had Craig Nowak for company, but despite forging ahead and opening up a 20-second gap on the rest of the field over the next two kilometres, the pace dropped slightly and he passed through the four-kilometre mark in 10:41.

Needing a final kilometre of 2:48 to equal the ratified world record set by Julien Wanders in Monaco earlier this year, Cheserek achieved his target and crossed the line in 13:29, taking nine seconds off his PB in the process. Fellow Kenyan David Bett was a distant runner-up in 13:54.

Sharon Lokedi won the women’s race to complete a Kenyan double. Part of a large pack in the early stages, she broke away in the second half to win in 15:48. Britain’s Charlotte Arter was second in 16:01.

There have been several quicker times recorded over 5km on the roads, but the event only became an official world record discipline last year. Wanders’ 13:29 clocking in February was the first performance to fulfil all of the criteria needed for a world record and his mark was ratified last month, along with Sifan Hassan’s 14:44 clocking from the women’s race in Monaco.

Kenya’s Rosemary Wanjiru won the Credit Union Cherry Blossom Ten Mile Run on Sunday (7) with 50:42, breaking the long-standing course record set 21 years ago by Colleen De Reuck. Her winning time is also the best mark ever achieved on a record-eligible course in a women-only race.

The pair were still side by side at 15 kilometres, reached in 47:13, but Wanjiru managed to edge ahead in the closing stages to win in 50:42. Gebreslase finished second in 50:47, just one second shy of the Ethiopian record. Kenya’s Margaret Muriuki was third in 51:38.

The men’s race was similarly close as Ethiopian half marathon record-holder Jemal Yimer held off a strong challenge from Kenya’s Josphat Tanui to win by two seconds in 45:36.