Bedan Karoki wins the Copenhagen Half Marathon (© CPH Half 2015)

Eighteen months after the Danish capital hosted the IAAF World Half Marathon Championships, Kenya’s Bedan Karoki won the inaugural edition of the Copenhagen Half Marathon, clocking a world-leading 59:14 at the IAAF Bronze Label Road Race on Sunday (13).

His time was a personal best and his victory meant that Karoki remains undefeated at the half-marathon distance, having won his previous three races over 13.1 miles last year.

Mild rain and a temperature of 15C offered good conditions for the 24,000 participants, although it was a bit windy. The two pacemakers ran the first 5km in 13:54, but they dropped out just before 10km, which was reached in 27:56. With 12 men still in contention, Karoki took up the running at the front.

The pace dropped slightly in the next five kilometres, but only four other men – Edwin Kipyego, Alex Oloitiptip, Simon Cheprot and Paul Lonyangata – were able to stay within a few seconds of the world cross-country silver medallist. Karoki passed the 15km mark in 42:05 with a lead of two seconds over Kipyego and Oloitiptip.

No one could follow Karoki’s strong pace over the final three miles and he crossed the line in 59:14, just six seconds short of the Danish all-comers’ record set in the same city by Geoffrey Kamworor at last year’s IAAF World Half Marathon Championships.

“The weather was not too bad; perfect temperature, but a bit windy,” said Karoki. “I am very happy with my PB. At 8km the pace was slowing down, so I wanted to push. It was a bit hard to run mostly on my own. With more competition, I could have run under 59 minutes.”

Berlin Half Marathon winner Berhanu Legese of Ethiopia had to settle for a disappointing 17th place in 1:02:56, more than three minutes slower than the time he clocked in the German capital earlier this year.

Purity Rionoripo made it a Kenyan double by winning the women’s race, clocking a PB of 1:08:29.

By 15km, with the clock reading 48:44, only Ethiopian newcomer Sutume Asefa was able to stick with Rionoripo. But the 2009 world youth 3000m champion made her move with little more than a mile to go.

Rionoripo’s time of 1:08:29 took 31 seconds off the PB she set in Yangzhou back in April. Like men’s winner Karoki, Rionoripo had won all three of her half marathons last year in her first three attempts at the distance.

“I am very happy with setting a personal best,” said Rionoripo, who will make her marathon debut in Lisbon on 18 October. “The course was great, flat and fast.”

Asefa, who only appeared on the international racing circuit this year, had won all of her races to date. Despite this being her first loss, the 21-year-old could take some consolation in setting a PB of 1:08:47.

Kabuu held on for third place in 1:08:51, just 14 seconds shy of the time she ran when finishing fourth at the World Half Marathon Championships in the same city last year.

Further down the field, Agai and France’s European champion Christelle Daunay were locked in their own battle. Daunay finished just ahead of Agai, both clocking 1:09:57. 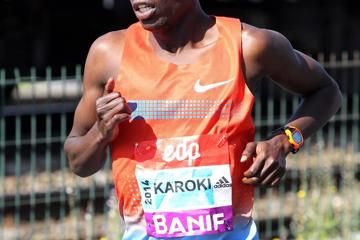