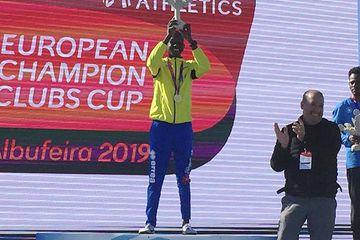 Jacob Kiplimo and Fancy Cherono were the victors at the 42nd edition of the Almond Blossom Cross Country in Albufeira on a sunny and windy Sunday (3) in what was the final meeting of the current IAAF Cross Country Permit series.

The competition also doubled as the European Champion Clubs Cup. Kiplimo, representing Italian team Casone Noceto, broke away on the last lap of the 9.730km course. The 18-year-old Ugandan – who has also won the permit meetings in Atapuerca, Soria, Alcobendas and Seville in recent months – was kept on his toes by Kenya’s Davis Kiplangat, who crossed the line just a few strides behind.

Sweden’s Robel Fsiha was a distant third, 50 seconds adrift of the lead pair.

Kiplimo explained afterwards that he had been experiencing some minor pain in his back. “I had to manage my pace throughout the race so that I wouldn’t compromise my main goal, the IAAF World Cross Country Championships,” he said.

“On the final lap I felt that I could increase my pace, but Kiplangat showed that he is strong too,” added Kiplimo.

The 18-year-old won the world U20 cross-country title on home soil in Kampala two years ago. Although he would be young enough to defend his title in Aarhus on 30 March, he recently stated that he would contest the senior race in the Danish city.

The women’s race was a close battle between Kenyans Fancy Cherono and Daisy Kimeli. Representing Turkish club Kasimpaşa Spor Kulübü Derneği, Kimeli led for most of the way and was six seconds ahead of her 17-year-old compatriot after the second and third laps.

But Cherono, the Youth Olympic Games steeplechase champion and African bronze medallist, produced a great sprint once the finish line was in sight and took the win in 20:16 to Kimeli’s 20:19.

“I’m so happy to help my team win the European Cup and take this individually,” she said.

Houlihan and Kipchirchir cruise to US cross-country titles

A large lead pack of 10 women ran together through the first two miles, covered in 10:30. Houlihan, Molly Huddle, Marielle Hall and Aliphine Tuliamuk all featured in the lead group and were among the six women left in the pack at six kilometres, which was reached in 19:56.

Tuliamuk led through the seventh and eighth kilometres before Huddle took up the pace and led going into the final kilometre with Hall, Tulimuka nd Houlihan still close behind.

With about a minute left, Houlihan moved up a gear and forged ahead of Huddle with an impressive and controlled finishing kick, crossing the line in 32:47. Huddle held on to second place in 32:56, one second ahead of Hall.

The five leading contenders in the men’s race started breaking away from the rest of the field at the half-way point, which they reached in 14:20. Shadrack Kipchirchir led from Hillary Bor, Emmanuel Bor, Stanley Kebenei and Leonard Korir and the quintet exchanged the lead several times over the next few kilometres.

The five men were still in close contact as they approached the closing stages, but Kipchirchir proved to have the strongest finish and he kicked to victory in 28:53. Emmanuel Bor placed second in 28:54 with Korir taking third place in 28:56.

Shuaib Aljabaly and Nicole Clermont won the U20 men’s and women’s races respectively.