Kenya’s Norah Tanui arrived in Rovereto fresh from a 10km lifetime best of 31:17 in Valencia last weekend and the 22-year-old demonstrated she is an athlete for all surfaces with a dominant victory at the Cross Internazionale della Vallagarina on Sunday (22).

Tanui – who improved her 3000m steeplechase lifetime best from 9:25.07 to 9:03.70 last summer and ran 9:05 or faster three times in the space of six days in August – broke clear in the second kilometre and opened up a winning margin which increased to more than one minute ahead of a largely domestic line-up.

The African steeplechase champion covered the undulating 6.44km course in 21:05 with mountain running specialist Sara Bottarelli an isolated second in 22:29. Last year’s winner Sara Dossena had to settle for third in 22:36.

The men’s 8.8km was a more competitive affair with late entrant Telahun Bekele becoming the first Ethiopian to claim the men’s title since world 5000m champion Muktar Edris in 2013.

Bekele used the final incline to his advantage, breaking away from Uganda’s world steeplechase finalist Albert Chemutai to win by five seconds in 26:59.

Belgium’s Soufiane Bouchikhi continued his excellent run of form on this terrain with another dominant win on home soil at the Easykit Cross Cup in Hannut, Belgium on Sunday (22).

Little more than a week after finishing fourth against a strong line-up at the Great Edinburgh XCountry, Bouchikhi turned the tables on last year’s winner Andy Vernon from Great Britain, winning over 9km in 29:10. Vernon had to settle for second in 29:27 with 2016 European U23 cross-country champion Isaac Kimeli a distant third in 30:00.

Bouchikhi, who has also claimed notable wins in Mol and Roeselare this winter, is targeting the 10,000m this summer at the European Championships in Berlin.

Ethiopian steeplechaser Birtukan Adamu retained her title in the women’s 6km, winning in 23:31 by six seconds ahead of Romania’s Roxana Barca.

Chelimo, who set a half marathon lifetime best of 1:06:25 last September and has been named on Kenya’s team for the IAAF World Half Marathon Championships in Valencia in March, broke clear of Jemeli at about the six-kilometre mark, winning in 32:18 ahead of Jemeli (32:36).

Chelimo’s main focus before the World Half Marathon Championships is the prestigious Ras Al Khaimah Half Marathon on 9 February. “It’s a first course and I’m eyeing a podium finish and a personal best,” she told reporters after the race.

Two of Kenya’s brightest prospects prevailed in the U20 races with world U18 2000m steeplechase silver medallist Cleophas Kandie winning the U20 men’s 8km in 25:45 while world U18 800m silver medallist Lydia Jeruto stepped up in distance to win the U20 women’s 6km in 22:50. 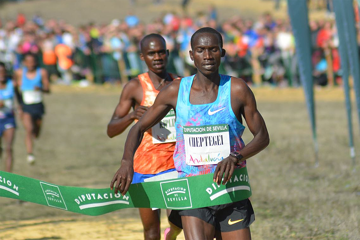 Cheptegei and Tirop prevail in Seville ...