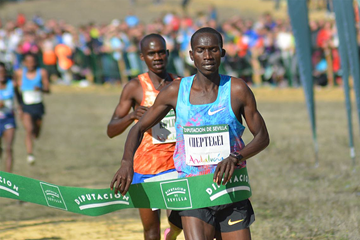 Cheptegei and Tirop prevail in Seville

In doing so, the winners brought an end to Selemon Barega’s and Ruth Jebet’s respective winning streaks.

Held on a pleasant and dry afternoon with the temperature about 16C, the men’s 10.8km didn’t kick off particularly fast as a large pack covered the opening two kilometres in 6:09, led by Spain’s European cross-country silver medallist Adel Mechaal alongside his compatriot Ilias Fifa while the main favourites ran conservatively in these early stages.

The following circuit took 6:13 with 11 men still in the main group, headed by Uganda’s Joshua Cheptegei, but it was his compatriot Jacob Kiplimo who began to dictate the pace shortly afterwards. His front running (6:04 for the lap) soon paid dividends as the leading pack was whittled down to five men in the guise of the Ugandans, Tanzania’s Emmanuel Gniki, and the Ethiopian duo of Barega and Hadis, the former eager to celebrate his 18th birthday with another win.

At the bell (6:08 for the penultimate loop) there were no hint about who would finally be the winner as the five athletes ran virtually even, exchanging glances. Kiplimo and Cheptegei then upped the pace again to easily leave behind Hadis and Gniki while Barega managed to run at their shoulders.

With just 800 metres to go, Barega – who is unbeaten so far this cross-country season – began to fade while Kiplimo tried his best to stick with Cheptegei’s brisk pace. It was clear the winner would be Ugandan; the only question remaining was which one.

After negotiating the narrow final bend, Cheptegei led closely followed by Kiplimo, who never threatened his older compatriot’s hierarchy and, as had been the case in Venta de Baños and Elgoibar, had to settle for the runner-up spot, one second in arrears.

The fight for the third place on the podium was just as thrilling. With 200 metres remaining, Barega was in a comfortable third place, but came under pressure from a fast-finishing Hadis. Barega just managed to hold on to his position as both athletes were credited with the same time, 31:01.

“I wasn’t sure if I would win today because I last competed in mid-November (when he fell just three seconds short of the world 15km best) and I really didn’t know how I was going to feel in my opening cross-country race of the season,” said 21-year-old Cheptegei, who placed fifth here in 2015 as a junior. “Luckily I felt strong and managed to succeed.”

The start of the women’s 8.265m race was led by the Portuguese pair of 2008 European cross-country bronze medallist Ines Monteiro and European half marathon champion Sara Moreira. With seven minutes on the clock, Bahrain’s Ruth Jebet took command of the race and barely two minutes later only the Kenyan trio of Agnes Tirop, Hellen Obiri and Lilian Rengeruk were close to her. Spain’s Trihas Gebre was a lonesome fifth after losing contact with the African contingent always headed by world steeplechase record-holder Jebet.

Five-and-a-half kilometres into the race, 2015 world cross-country champion Tirop injected a quicker rhythm which was followed only by world 5000m champion Obiri while – much to the surprise of the spectators – Jebet gradually lost ground and was left with no chances of winning before the closing two-kilometre lap.

Fully aware of Obiri’s track credentials – which include a 3:57.05 1500m PB and the 2012 world indoor 3000m title – Tirop pushed hard on the closing lap. With a kilometre and a half left, Tirop had already managed to get rid of Obiri, while third place seemed to be a battle between Rengeruk and Jebet.

While Tirop’s success became beyond doubt, Rengeruk first left Jebet behind to seriously threaten Obiri’s runner-up spot. At the tape, Tirop was a solid winner while Rengeruk pipped a tired Obiri 20 metres before the tape, completing a Kenyan 1-2-3 finish.

“Today’s win makes me very satisfied after my second places in San Giorgio Su Legnano and Elgoibar earlier this month,” said an elated Tirop. “After this European cross-country tour, I’ll now head back home to prepare the Commonwealth Games where I plan to contest the 5000m.”