The IAAF Diamond League final shot put took place a day before the main meeting at the Place de la Monnaie in the centre of Brussels – and Darrell Hill of the United States hit the jackpot with a last round effort of 22.44m, more than half a metre over his personal best, to take the Diamond Trophy and accompanying US$50,000 winner’s cheque as well as setting a meeting record.

Until that inspired final effort by the 24-year-old from Darby, Pennysylvania, it looked as if a first round effort of 22.37m would be enough to earn victory for Hill’s compatriot Ryan Crouser, the Olympic champion, who had arrived here, in his own words, “looking for revenge” after failing to get a medal at the IAAF World Championships London 2017 earlier this month.

Of Crouser’s three scoring efforts, two were over 22 metres and the other was 21.94m, but in a contest of extraordinarily high quality – seven of the eight finalists bettered 21 metres – that ultimately proved sufficient only for second place, with its prize of US$20,000. On the day, seven centimetres cost Crouser US$30,000.

Hill set his previous best of 21.91m in April in Los Angeles. He was third at last year’s US Olympic trials, earning him a trip to Rio, where a best of 19.56m was not enough to earn him a place in the final.

For most of the final it looked as if another US thrower, 2015 world champion Joe Kovacs, would be the only likely rival to Crouser as he sought to better the first round of 21.62m that had left him in second place.

But a string of what looked like challenging efforts from the former world champion incurred the red flag, and it seemed Crouser had succeeded in his season-ending ambition in front of a small but appreciative crowd in the busy city centre.

Double world champion David Storl of Germany moved up to third place with his final throw of 21.47m, but it was still some way short of deposing the leader.

Darrell Hill with his Diamond Trophy in Brussels

Hill, however, had offered a warning shot in the fifth round with a huge effort that was invalidated by a red flag with which he was clearly far from satisfied.

Next time round he repeated the distance, legally, and the contest was turned on its head.

Crouser managed a final effort in response of 21.98m before sportingly seeking out the officials to shake hands with them as Hill, draped in the Stars and Stripes, began to celebrate his dramatic victory.

His throw would have won him every major championship in the past seven years, save for last year’s Rio Olympics, which Crouser won with 22.52m.

BACK
Pages related to this articleAthletes
Darrell HILL 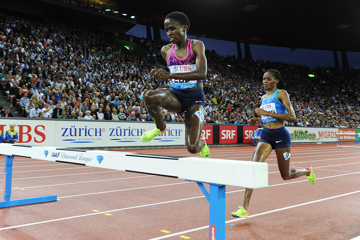 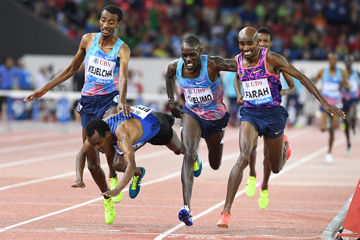