It was Ethiopia all the way as they swept the board in both the men’s and women’s races at the 14th Standard Chartered Dubai Marathon – an IAAF Gold Label Road Race – on a foggy Friday morning (25).

Lelisa Desisa, 23, only got away from his rivals in the final 200 metres but the marathon debutant won in 2:04:45, the 13th fastest time in history. With four other men close behind, this was the first marathon in history to feature five men going under 2:05.

Desisa’s colleague, and long-time race leader, Berhanu Shiferaw was second in 2.04.48. Another compatriot, veteran Tadese Tola, clocked a personal best of 2:04:49 in third with yet another Ethiopian, Endeshaw Negesse, fourth in 2:04:52. Kenyan debutant Bernard Koech finished fifth in 2:04:53.

Tola, Negesse and Koech all clocked the fastest times ever for their position.

The Ethiopian coaches had been warning everyone to look out for Desisa, but it was the unheralded Shiferaw, with a previous best of 2:08:51, who provided the impetus throughout virtually the whole race that led to the spate of the fast finishing times.

He tracked the pacemakers from the start, and was never absent from the leading trio despite some variable weather conditions.

The early fog for the 7am start, with the temperature at 15C, dissipated when the leaders hit the coast after 8km, but on the lengthy stretch down the beach road, the fog returned even thicker, bringing high humidity with it.

A $1 million dollar prize pot is sure to bring out the bounty hunters, proof of which was 20 world-class marathoners still in contention at halfway, which was reached in 62:39, but Shiferaw’s efforts then ensured an even faster second half.

Another feature of the closing stages of the race was the tenacity of Tola.

With a best of 2:05:10, set when finishing fifth here last year, Tola looked spent at 35km. But despite dropping off the lead group – by now down to six men – a couple of times, he fought his way back into contention and used his experience to drag himself home in third place.

“I tried to push the pace at 38km,” said Desisa, “but the others responded strongly so I decided to wait until the end. I have a good sprint and I was confident that it would win me the race. I had aimed for 2:06 for my debut, but when I saw the time at the finish I was shocked. If I can find a similarly good course, and my coach agrees, maybe next time I can go for the world record.”

The winner comes from Oromia, homeland of the Bekele brothers, the Dibaba sisters and other athletics luminaries such as Olympic marathon winners Fatuma Roba and Tiki Gelana. He said after his victory that he only ran sporadically at school, “but when I did, I would win. I then entered a junior regional race, and won that. After that, I moved to Addis and started training properly."

He first emerged internationally in 2009, winning the African junior 10,000m title in 28:46.74. He reduced that to 27:18.17 last year, having followed a well-worn path to marathon glory with several sub-60-minute half marathons.

If the Ethiopian coaches were aware of Desisa’s good form in training, they were stunned by Shiferaw taking four minutes off his best. “Nobody expected this from him,” said Gemedu Dedefo, coach to women’s winner Tsegaye. “He surprised all of us.”

In contrast, the women’s race lived up to predictions in all but the finishing time.

Tirfi Tsegaye was the heavy favourite after her victory in Paris last year and then second place in Berlin last September in 2:21:19.

She was always part of the leading group and, by 30km, she was out on her own. Although easing off in the final stages, she still won by close to 20 seconds.

“I came with two aims,” said Tsegaye, “to win, and to run under 2:20. I was determined to push in the second half of the race, but by that time, it had become very humid, and it was affecting me. So I’m happy to win, but unhappy I didn’t break 2:20. I’ll have to come back next year and try again.”

Her colleagues, Ehitu Kiros and Amane Gobena, gained some ground on her in the last five kilometres, Kiros coming home second in 2:23:39 with Gobena third in 2:23:50 as Ethiopian runners filled the first six places. 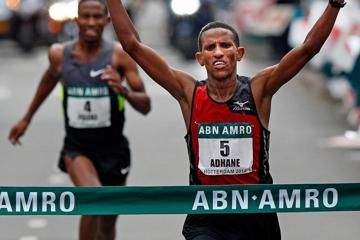