Gong Lijiao dominated the shot put at the second 2018 IAAF Diamond League meeting of the season in Shanghai on Saturday (12).

The world champion, who also clinched her first IAAF Diamond League title in 2017, was in control of the contest from start to finish. Any of the four marks she recorded would have been enough for the win, much to the delight of the Chinese fans gathered on a humid evening in Shanghai Stadium.

Gong’s best came in round two, as she went out to a world-leading 19.99m, some 1.29 metres better than recently crowned Commonwealth champion Danniel Thomas-Dodd.

"I intended to break 20 metres – it's a pity I didn’t manage to," said the ambitious Gong. "I will focus on the physical training to get a better performance. In the Diamond League, I probably won't join every meeting, but I will try to get points to secure a better ranking.”

In third place was Raven Saunders, who held the world lead coming into the event, but could only produce 18.63m on her IAAF Diamond League debut.

Another Chinese thrower, another world lead

There was another popular winner in the women’s javelin as Asian record-holder Lyu Huihui recorded a meeting record. The 28-year-old threw beyond 60 metres with every one of her six efforts, her best coming in round three as she went out to 66.85m.

"First of all, I would like to congratulate Gong Lijiao,” said Lyu. “I’m pretty satisfied with my performance and I'm glad to win this competition.”

A challenge from Marcelina Witek failed to materialise. The Pole went out to 64.49m with her opening throw to take an early lead, but she failed to record any further legal efforts as she struggled with the rainy conditions that gathered pace through the second half of the contest.

Ibarguen back to winning ways with world lead

If anyone doubted Caterine Ibarguen’s appetite after her run of four IAAF Diamond League titles came to an end in 2017, the Colombian provided an emphatic answer in the women’s triple jump.

The 34-year-old had to settle for third place at last season’s Zurich decider, but won in Shanghai by notching a world-leading 14.80m effort. After opening with a modest 14.21m – which was still sufficient for an early lead – the Olympic champion went out to a world-leading 14.66m in round three. She extended that best in the final round to once again stamp her authority on the event.

Caterine Ibarguen, winner of the triple jump at the IAAF Diamond League meeting in Shanghai

"I feel excellent because of my status, the environment and the passionate audience," said Ibarguen. "I just want to keep improving my performance for my family and my country because they are my motivation."

Commonwealth silver medallist Shanieka Ricetts was second with 14.55m, while her Jamaican compatriot, Kimberly Williams, who had prevailed on Gold Coast, finished third with 14.35m.

Luvo Manyonga didn’t look near his best through the opening rounds of the men’s long jump as he failed to register a legal effort in the first two rounds. By the time he had posted 8.11m in the third, China’s Shi Yuhao had already set the standard with a Asian age-19 best of 8.43m.

Yet Manyonga, who won the world and IAAF Diamond League titles in 2017, found form in round four, hitting 8.43m to take the lead courtesy of a superior second-best jump. Shi then went out to 8.21m to leapfrog the South African. But Manyonga showed his class by producing a last-round world-leading 8.56m to claim the win.

“When Shi went out to 8.43m, I said to myself, ‘I have to think straight’,” said a relieved Manyonga. “This competition was not a walk in the park. I was really pleased to respond."

Shi had to settle for second; in an effort to reclaim the lead with his final jump, he couldn’t get it right and hit the sand awkwardly with what appeared to be an injured ankle.

Not her best, but Lasitskene still good enough

In the women’s high jump, Marya Lasitskene looked short of top form as she required two efforts to clear at 1.84m, 1.91m and 1.94m. That meant that Mirela Demireva briefly held the lead, the Bulgarian having gone over at 1.94m with her first effort.

Yet Lasitskene proved why she is the world champion indoors and out, as well as the IAAF Diamond League champion. She went over at 1.97m with her first jump to wrestle control as Demireva couldn’t respond.

"Everything is fine," insisted Lasitskene. "I am really pleased with the preparation and the way the competition went. I do not count the victories; I leave that for the journalists."

For the record: her run of wins now stands at 39.

Conditions were far from ideal for pole vaulting: muggy weather at the start of the evening soon turned to rain, leaving a slick track and poles tricky to grip.

Renaud Lavillenie, a seven-time IAAF Diamond League champion, entered the contest late and, although he required two efforts to get over at 5.71m then 5.81m, that was enough to prevail over Piotr Lisek, who had needed an extra effort at 5.71m.

"It was not an easy day today," said the world record-holder. "The conditions were very hard. It was nice to get the win."

It is Lavillenie’s first on the IAAF Diamond League circuit since September 2016. 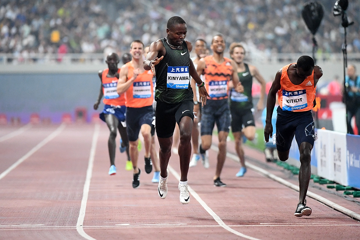