On a night that was all about winning rather than times, Conseslus Kipruto of Kenya found a way to retain his IAAF Diamond League steeplechase title at Zurich’s Weltklasse meeting on Thursday (30).

Despite losing his shoe during the first lap, he moved past Morocco’s Soufiane El Bakkali in the final few strides after clearing the final hurdle in second place. That effectively ignited the 25,000 capacity crowd in what was the first of two IAAF Diamond League finals in the space of 24 hours, with a few athletes having travel planned to get over to Brussels for part two.

The excitement levels peaked again as the women’s 5000m produced another classic head-to-head sprint finish, with Kenya’s world champion Hellen Obiri eventually retaining her title despite huge pressure from European champion Sifan Hassan of the Netherlands – who then faced a drive through the night to get to Belgium.

The evening had first come alive as the final lap of the steeplechase played itself out in dramatic fashion, with world and Olympic champion Kipruto eventually finding a way past Morocco’s 22-year-old world silver medallist in the final 30 metres after clearing the last hurdle marginally behind.

Kipruto has proven himself over and again as a competitor, winning the 2016 Olympic title and beating El Bakkali to last year’s world title, but he has surely never faced such a challenge as this.

“I have big pain,” he said after finishing a stride ahead in 8:10.15, with his taller opponent dropping, exhausted, to the track after clocking 8:11.19.

“I am injured because I lost my left shoe. That was a mess. But it motivated me to fight as hard as I could, so the race went well.”

Evan Jager of the United States, Olympic silver medallist and world bronze medallist, took third place in 8:13.22 having led five men through the bell as excitement in the stadium had begun to gather. First El Bakkali moved past him on the back straight, then the hindered hunter, Kipruto.

On a cool but thankfully dry evening that was all about racing rather than timing, there was no more deserving winner of the 16 Diamond trophies handed out by IAAF President Sebastan Coe, and their accompanying cheques for US$50,000.

Six women, including Obiri, Hassan and Ethiopia’s Senbere Teferi and world 1500m record-holder Genzebe Dibaba, had reached the bell together – and with drama imminent. Hassan, facing a night drive to Brussels in order to contest the 1500m in the second IAAF Diamond League final of the season, made her break on the back straight, floating to the lead, but very soon the smaller, dogged figure of Obiri, the world champion, had moved past her.

As the two women reached the straight, Hassan, an emphatic winner of the European title earlier this month, moved wide for another challenge. But Obiri, serenely confident beforehand, simply wasn’t having it, claiming one of the sixteen Diamond trophies on offer, and its accompanying winner’s cheque for US$50,000, as she crossed in 14:38.39, with Hassan second in 14:38.77 and Teferi third in 14:40.07.

“Before the race I felt would win,” said Obiri, who covered the final 200 metres in 27.39. “Finally everything came together, and I am proud.”

Noah Lyles retained his 200m title in the kind of easy style we have come to expect, gliding clear of Turkey’s world champion Ramil Guliyev over the final 50 metres before crossing in 19.67 – an exceptional time on a cool evening, and one that would perhaps have surpassed his world-leading mark of 19.65 had he not looked over to the clock and raised both arms as he approached the line.

Guliyev was second in 19.98, with Jereem Richards of Trinidad and Tobago finishing third in 20.04. Local hero Alex Wilson, the European bronze medallist, got a big reception after finishing sixth in 20.40 after gasping out his thanks to the home crowd.

“I came here for the win, and I got it,” said Lyles. “I got out reasonably from the blocks, but I will go on with my training to make it even better.”

Britain’s European 100m and 200m champion Dina Asher-Smith finished powerfully to edge her way past Marie-Jose Ta Lou, the Ivorian athlete with whom she shares the fastest time of the year, 10.85, but neither was able to resist the other Ivory Coast athlete in the field.

Murielle Ahoure got away to the kind of start one would expect of a world indoor champion and maintained her form to the line to win in 11.01. For Ahoure, who missed the African Championships because she was not sure of her form, this was a first Diamond Trophy.

McMaster once again gets the better of Warholm

For world and European 400m hurdles champion Karsten Warholm, beaten to last year’s IAAF Diamond League title by a final surge from Kyron McMaster of the British Virgin Isles, history repeated itself as he was caught over the final 30 metres, with McMaster winning in 48.08 and the Norwegian just 0.02 behind, with Yasmani Copello of Turkey third in 48.73.

A men’s 1500m unfortunately lacking the presence of Norway’s 17-year-old European 1500m and 5000m champion Jakob Ingebrigtsen, who was reportedly unwell with a sore throat, was won in emphatic style by the Kenyan who has dominated the distance this season, Timothy Cheruyiot.

After his training partner Elijah Manangoi, who beat him to the world title last summer, had led through the bell, Cheruyiot made his challenge around the final bend and moved clear in the final straight to collect the spoils in 3:30.27.

Manangoi looked as if he would be overtaken in the final metres by Djibouti’s Ayanleh Souleiman, but found the strength to retain second place in 3:31.16, with Souleiman finishing third in 3:31.24, 0.35 ahead of Morocco’s Abdelaati Iguider.

Ingebrigtsen’s older brother Filip, third on this year’s world list behind the two Kenyans, faded to seventh in a weary 3:34.13.

World and Olympic 800m champion Caster Semenya ran the race she felt, without pacemakers, just the way she likes it – and she obviously felt good despite having had such a long season that began with a Commonwealth Games win in April as she took route one once again and pushed to the line for a winning time of 1:55.27.

For someone who, only the previous day, had said this race was about winning rather than running fast, the 27-year-old South African seemed to be pushing herself very hard. She has run faster on just three occasions.

One-lap wins for Kerley and Muhammad

Fred Kerley of the United States won the honours in the men’s 400m, powering home in 44.80 ahead of compatriot Nathan Strother, who clocked 44.93, and Britain’s European champion Matthew Hudson-Smith, who recorded 44.95.

Steven Gardiner slowed to a pained halt at the start of the finishing straight and walked gingerly to the line, with Kerley doubling back up the track to acknowledge him, followed by Hudson-Smith, who walked the Bahamian over the line and then helped him leave the arena. Nice touches at the end of a race that had a distinctly attritional feel.

Gardiner was going great guns this season until he injured his hamstring in Stockholm, since when his form has dipped.

Olympic champion Dalilah Muhammad of the United States retained her IAAF Diamond League 400m hurdles title with a committed run, winning in 53.88 from compatriot Shamier Little, who clocked 54.21, and Jamaica’s Janieve Russell, whose late run past Georganne Moline prevented a US sweep.

There was to be no glorious final flourish for a weary looking European champion Lea Sprunger, who nevertheless looked happy enough after finishing seventh in 55.36. 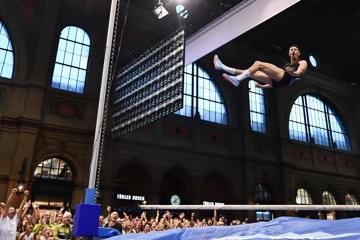 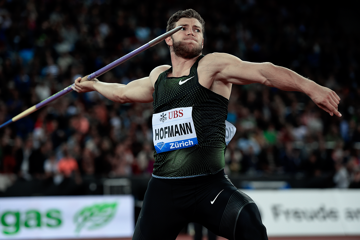