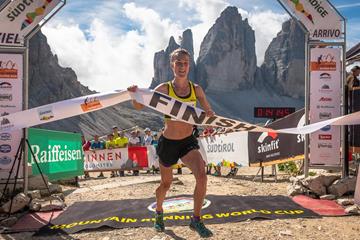 Britain’s Sarah Tunstall and Eritrea’s Petro Mamu were victorious at the Drei Zinnen Alpine Run in the heart of the Italian Dolomite Mountains on Sunday (15) for the sixth of seven races in the WMRA World Cup series.

The course, which is 17km long and involves 1300m of uphill climbing, is a challenging one but spectacular views welcomed the runners who made it to the finish line.

The race unfolded with a fast starting lap around the town of Sesto, making it clear the existing race records were going to be in jeopardy. At the first checkpoint after 7km, at Fondovalle Hut, Mamu made the first move, and he was joined by USA’s Joe Gray and Eritrea’s Filimon Abraham. WMRA World Cup leader Andy Douglas held a position just behind with the Italians Francesco Puppi and Hannes Perkmann who were slightly detached at that point.

The runners then faced a steep climb and at 12km they reached the Comici Refuge where the race had another jolt in the top positions as the long uphill section started to take its toll. Mamu and Gray remained alone out in front in their own battle for top spot. Behind them, Abraham slowed slightly while Puppi gained on him to contend for the third position.

During the short but steep descent from the Forcella of Piani di Cengia, Mamu and Gray continued to watch one other. Gray had a small stumble, allowing the diminutive Eritrean to take advantage and he surged away. Gray fought back in the final 600 metres but couldn’t catch Mamu, who won in 1:22:37, taking seven seconds off his own course record.

Out in front on her own at 12km, now more than two minutes ahead of McCormack, Tunstall climbed strongly and made it look as though a race record was likely. She went on to win convincingly in 1:41:45, taking 50 seconds off the course record set last year by Michelle Maier.

World Cup leaders Douglas and McCormack now have unassailable leads in the 2019 series, but the other podium places are still there for the taking. The final race in the WMRA World Cup will be held in Smarna Gora on 12 October.