Getaneh Molla produced the fastest marathon debut in history to win the Standard Chartered Dubai Marathon, while Ruth Chepngetich moved up to third on the women’s world all-time list at the IAAF Gold Label road race on Friday (25).

Molla’s winning time of 2:03:34 took 26 seconds off the course record that was set last year and puts him sixth on the world all-time list.

Chepngetich, meanwhile, took 87 seconds off the PB she set in Istanbul just two months ago to win in 2:17:08, an improvement of two minutes and nine seconds on the previous course record. It moves her from eighth to third on the world all-time list behind world record-holder Paula Radcliffe (2:15:25) and Mary Keitany (2:17:01).

With the temperature about 18C, both races started fast but the pacemakers for the elite men were slightly shy of their half-way target of 1:01:30. A group of 14 men, including three pacemakers, were still in the lead pack as they reached the half-way point in 1:01:43.

The pack soon began to whittle down, though, with 2015 Dubai winner Lemi Berhanu and 2017 Berlin runner-up Guye Adola among the athletes who dropped back. The Ethiopian duo eventually withdrew from the race.

Just Molla and fellow Ethiopian Herpasa Negasa were left at 35 kilometres, reached in 1:42:17. Compatriot Asefa Mengstu rejoined them briefly but lost contact again by 40 kilometres, which the lead duo passed in 1:57:16.

Although their pace had slipped, it was clear that the leaders were on schedule to produce Dubai’s first sub-2:04 finish. They stayed together until the final 700 metres when Molla began to pull away from Negasa, eventually crossing the line six seconds ahead of his rival in 2:03:34.

This may have been Molla’s first race over 26.2 miles, but he has previously impressed at shorter distances and across various terrains.

He has won the past four Ethiopian 5000m titles and is twice a national champion at cross country. He finished fifth at the IAAF World Half Marathon Championships Valencia 2018 and second in the 5000m at the African Games five months later.

"I was hoping for maybe 2:05 or 2:06," said a surprised Molla of his debut marathon. Later this year he hopes to contest the 10,000m at the IAAF World Athletics Championships Doha 2019.

Asefa Mengstu completed an all-Ethiopian podium with 2:04:24 for third place, one place higher than his finishing position last year.

While the men’s race set off outside the designated pace, the women’s contest started significantly quicker than planned.

Running with male pacemakers, a lead pack of six women covered the first 10 kilometres in 32:23, half of whom were left running together as they reached the half-way point in 1:08:10 – significantly quicker than the target time of 1:09:30.

But while one of that trio, Workenesh Edesa, was unable to maintain that pace for much longer, Chepngetich and 2017 Dubai winner Worknesh Degefa kept it going, passing 30 kilometres in 1:37:16 and 35 kilometres in 1:54:00.

With the pacemakers having done their job, Chepngetich gradually opened up a gap on her one remaining rival over the closing kilometres before going on to finish in 2:17:08. The 24-year-old became the first Kenyan woman since 2006 to win in Dubai.

Degefa held on for second place in 2:17:41, moving to fourth on the world all-time list. Her performance is the fastest runner-up time of any marathon in history and a 15-second improvement on Tirunesh Dibaba’s Ethiopian record. The only other race where two women have broken 2:18 previously was in London in 2017. 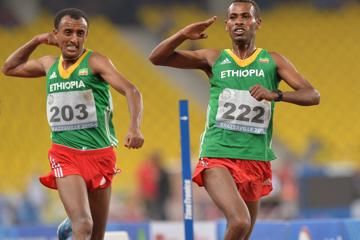