Swedish 17-year-old Duplantis entered the pole vault with a first-time clearance at 5.31m – a height no other athlete cleared – and followed it with clearances at 5.55m and 5.71m, also on his first attempts.

The world U18 champion then upped the bar to 5.82m. After twice knocking off the bar, he successfully sailed over it on his third try without making any contact. It was the third time this year that Duplantis had broken the world indoor U20 record, but his 5.82m performance is also an outright world U20 record, breaking the 5.80m set outdoors by Maksim Tarasov in 1989 and equalled by Raphael Holzdeppe in 2008.

Not only did Duplantis break the Swedish senior indoor record of 5.81m set by Alhaji Jeng in 2009, he also bettered the PB of his father, Greg Duplantis, who set a lifetime best of 5.80m in 1993.

“I’ve always wanted to jump higher than my dad,” said the world U20 bronze medallist, who will still be an U20 athlete next year. “It’s something I’ve always dreamed of. I didn’t think it would come this early.”

Earlier on Saturday, Trey Cunningham sped to a world U20 record of 7.45 in the heats of the 60m hurdles (99cm U20 height). He then bettered that time in the final on Sunday, winning in 7.40.

But in the final event of the championships, he had enough left in the tank to produce a world indoor U18 best of 21.05 to win the 200m.

US Olympian and world U18 400m hurdles champion Sydney McLaughlin won the girls' 400m, breaking her own US high school record with her winning time of 51.61. She now moves to third on the world U20 indoor all-time list and still has another year left in the U20 category.

Fellow world U18 champion Tara Davis won the long jump, her specialist event, with 6.47m on Saturday and then followed it with a surprise victory in the 60m hurdles in 8.14 on Sunday.

Brie Oakley provided one of the highlights on the opening day of the championships as she won the 5000m in a US high school record of 15:55.75. 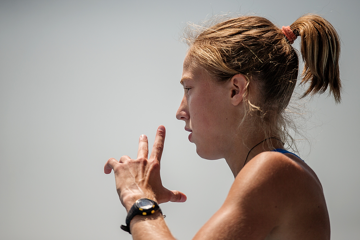 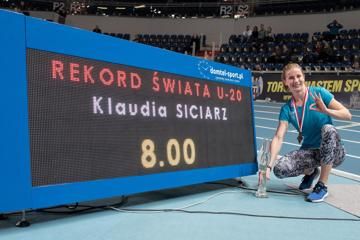