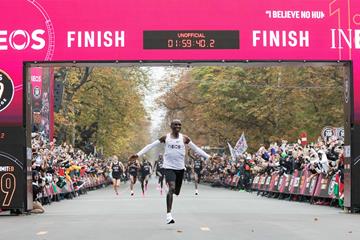 Pounding his chest and pointing to the crowd as he approached the finish line, the 34-year-old Kenyan became the first man to cover the 26.2 mile marathon distance in under two hours.

"It is a great feeling to make history in sport after Sir Roger Bannister [set the first sub-four-minute mile] in 1954," said Kipchoge, who broke the world record in the event at the BMW Berlin Marathon last year, clocking 2:01:39. His run today won't be ratified as a world record, but will nonetheless be remembered as one of the greatest pioneering milestones in athletics history.

The run kicked off at 08:15 on the Reichsbrücke bridge that spans the Danube before winding its way to the Austrian capital's iconic Prater park. There the course turned into a 4.4-lap run along the tree-lined Hauptalle that runs through the heart of park. The weather conditions, 9 celsius at the start with wind speeds between 0.5 and 1.5 metres per second, were nearly ideal.

Forty-one pacesetters were employed in the effort, broken down into nine teams who themselves were paced by a green laser light beamed from an electric car whose speed was set at a consistent 2:50 per kilometre pace. That meant Kipchoge was surrounded by a hive of fresh-footed pacesetters from start to finish --five forming a V-shaped human shield ahead of him and two more on each side about two steps behind.

As he approached the final 500-metre straight, the pacing team ahead of him stepped aside to cheer him on from behind, joining several thousand spectators who lined the street hoping to witness the feat.

Once he crossed, a wave of congratulatory hugs began, starting with his wife and children, who watched him perform for the first time. That was followed by a celebration with his pacing team, which included a slew of world class athletes in their own right, including world 5000m silver medallist Selemon Barega, reigning Olympic 1500m champion Matt Centrowitz, Norway’s Ingebrigtsen brothers – Henrik, Filip and Jakob, and multiple world medallist Bernard Lagat.

"The pacemakers did a great job, they are among the best runners of all time," Kipchoge said. "I thank them and appreciate them for accepting to do the job."

This was Kipchoge's second attempt at cracking the two-hour barrier in a controlled environment. He clocked 2:00:25 at the Breaking2 event in Monza, Italy, in May 2017.

"I wanted to run under two hours and show human beings can do a good job and lead a good life," Kipchoge said. "It shows the positivity of sport. I want to make the sport an interesting sport whereby all human beings can run and together we can make this world a beautiful world.”