Gardner returns with 11.02 win in Rovereto

Racing for the first time in over a year, English Gardner returned to action with an 11.02 victory in the women’s 100m at the 54th edition of the Palio della Quercia in Rovereto on Thursday (23), Italy’s oldest meeting.

Gardner, a gold medallist in the 4x100m relay at the 2016 Olympic Games, equalled the meeting record set two years ago by Jamaica’s Christania Williams. The 2016 US champion and Rio Olympic finalist beat world and Olympic finalist Michelle Lee Ahye and European 4x100m gold medallist Imani Lansiquot from Great Britain who clocked 11.23 and 11.24, respectively.

“I expected to run faster but I am glad I had the opportunity to compete here,” said Gardner, who last raced in July 2017 before she was sidelined by injury. A year earlier, Gardner clocked 10.74 to win the US title, equaling Merlene Ottey as the seventh fastest woman in history.

The women’s 800m race featured the European gold and silver medallists Nataliya Prishchepa of Ukraine and Frenchwoman Renelle Lamote along with European 1500m champion Laura Muir. Lamote prevailed in 1:59.58 beating two-time European champion Prishchepa, who had to settle with third place in 2:00.26 behind Lynsey Sharp (1:59.90).

“It was hard to come back to competitions after the European Championships,” said Lamote. “I was very tired after Berlin. My body needs recovery and this was my last competition of the season.”

“I wanted to end my season on a high note with 2.30,” Tamberi said. “I wanted to clear this height for my friends who came from Ancona. I am proud with my fourth place in Berlin, as I was not sure that I could achieve this result. My only regret was that I needed to make an attempt at 2.33m, as 2.31m would not have enough to win a medal.”

Paul Dedewo, second at this year’s US Championships, edged 2012 Olympic silver medallist Luguelin Santos in the 400m, 45.30 to 45.58. In the women’s rae, Aminatou Seyni from Niger pulled off the biggest surprise of the meeting when she took the win in 50.69, smashing her own most recent national record of 51.17 set in Heusden last month. Jaide Stepter of the US was a distant second in 51.84.

Germany’s Christin Hussong won the women’s javelin with a 62.14m effort, her only valid throw of the evening. 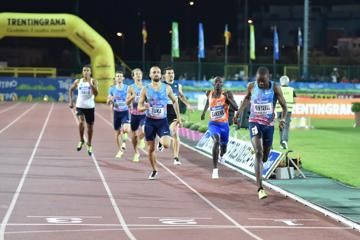 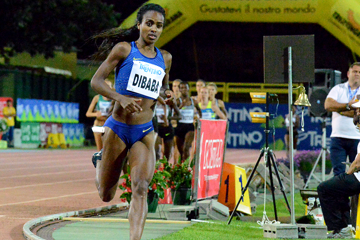