It was only right that it ended like this – a climax perfectly suited to a superb edition of the European Championships, with Germany striking gold in the field and on the track, their women’s 4x100m team bringing the house down in the final race of the night at the Olympic Stadium in Munich on Sunday (21).

With Alexandra Burghardt – who earlier this year won Olympic silver in the bobsleigh – leading them off, the baton changed hands with typical German efficiency, from Lisa Mayer to 100m champion  Gina Luckenkemper, it made its way into the hands of Rebekka Haase, who will have been surprised when she turned for home to see Poland on the outside lane as the closest challengers.

That was because race favourites Britain and medal contenders France had both failed to get the baton around after botching the first exchanges, leaving Haase to power to the line to take gold for Germany in 42.34, with Poland taking silver in a national record of 42.61 and Italy earning bronze in 42.84.

“If someone would have told me before the championships that I would come home with two gold medals, I would have said he is crazy,” said Luckenkemper, who had to have stitches in her leg due to a wound that opened during a fall after her 100m victory. “I cannot yet seize what happened this week.”

The men’s 4x100m was a far more straightforward affair, with Britain’s formidable quartet of Jeremiah Azu, Zharnel Hughes, Jona Efoloko and Nethaneel Mitchell-Blake powering to gold in a championship record of 37.67, with France taking silver with 37.94 and Poland the bronze in a national record of 38.15.

“I was feeling the pressure a bit, especially when they announced the German team, the crowd was loud and I knew then I had to perform, and to deliver,” said Azu. “So I went out and ran for my life.”

The women’s 100m hurdles saw Poland’s Pia Skrzyszowska produce a slick display to add European senior gold to last year’s U23 title, winning in 12.53 (-0.1m/s), with Hungary’s Luca Kozak taking silver in 12.69 and Switzerland’s Ditaji Kambundji the bronze in 12.74. Dutch star Nadine Visser was just off the podium in fourth with 12.75. Skrzyszowska had scant time to celebrate given she ran the first leg for the Polish 4x100m team just 37 minutes later.

“I had enough energy because after my individual race, I felt a lot of emotions and endorphins and I was taken straight away to the relay so I did not have the time to realise what just had happened,” said Skrzyszowska. “But that was crazy. I did what I should have done. I started very fast and kept the rhythm until the end. The job is done. I am so happy with the two medals.”

The men’s 800m saw world indoor champion Mariano Garcia crown a brilliant year by taking European gold, the Spaniard swooping to the front shortly before he passed 400m in 52.07. It was a lead he never relinquished, passing 600m in 1:18.59 and holding off all challengers to win in 1:44.85.

“I was expecting a much slower race, but it wasn't so I just went with it and decided to control it from the start,” said Garcia. “When I decided to take the lead, I knew I had to give it my all.”

World 1500m champion Jake Wightman showed his outstanding versatility by coming from behind to take silver in 1:44.91, while Ireland’s Mark English took bronze in 1:45.19. “I was very close to the gold and I would be very glad to get that but still I am pretty happy with the silver,” said Wightman. “I was not quite close enough in the last straight and it is tough when you are not that close with strong opponents.”

The men’s 10,000m boiled down to a last-lap shootout between a cluster of athletes, an endurance race that was ultimately decided by speed. It was Italy’s Yemaneberhan Crippa who had all the answers in that department, kicking clear down the home straight to win his first European senior title in 27:46.13.

“I am really happy with this gold medal, especially after having won a bronze in the past,” said Crippa. “Compared to four years ago, in Berlin 2018, I feel I have changed a lot – especially my mindset, I am much stronger mentally than I was in the past. I ran that last lap thinking that I had to look out for Jimmy Gressier. Although he was the big favourite to win, it looks like tonight it was my night.”

Norway’s Zerei Kbrom Mezngi, who made a big break with a few laps to go, ultimately took silver in 27:46.94 with France’s Yann Schrub earning bronze in 27:47.13. Gressier was just behind in fourth.

That was the action on the track, but Germany also had a great closing night on the field, where Julian Weber edged victory in a thrilling men’s javelin with 87.66m. Czech Republic’s Jakub Vadlejch took silver with 87.28m while Finland’s Lassi Etelatalo broke new ground in third, his PB of 86.44m earning him bronze.

“I still cannot believe it, I am on cloud nine,” said Weber, who had finished fourth in both last year’s Olympic final and this year’s world final. “I have been longing for this medal for a very long time. I did not do any warm-up throws because I had so much pain in my back. My physios did a great job but with this pain, there was less pressure for me. At the first attempt I tried to put everything in and it was overwhelming that I got 83 metres. This strong start helped me a lot.”

Vadlejch had seized command in the second round with his 87.28m effort and it was in the fourth round that Weber produced his winning effort of 87.66m.

“The silver medal is a very good result for me but I wanted to win,” said Vadlejch. “But I am very glad for Weber because he won on the home soil and made the crowd so happy.”

Ukraine’s Yaroslava Mahuchikh reigned supreme in the women’s high jump, and while she wasn’t at her best – failing three times at 1.97m – she showed her typical clutch mentality to get the gold with a first-time clearance at 1.95m.

“I would like to dedicate this medal to the Ukrainian people,” said Mahuchikh, who hopes to return home in September. “I left my home in March and it was difficult since then. I want to do something for my country and it is a pleasure for them to see my gold medal.”

Silver went to Montenegro’s Marija Vukovic who cleared 1.95m on her third attempt, while 17-year-old Serbian star Angelina Topic took bronze with a best of 1.93m.

“This is very, very important result for me – my first major senior medal,” said Vukovic. “I have been waiting for this for so long so you cannot imagine how emotional I feel right now.” Topic said she was “really, really speechless” about winning bronze. 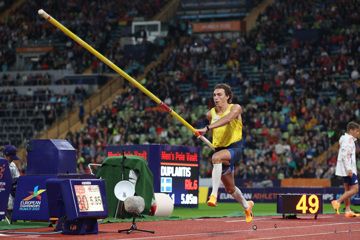 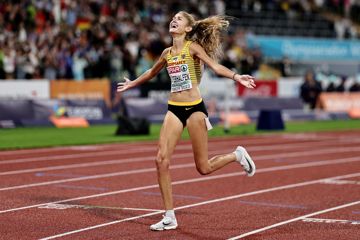 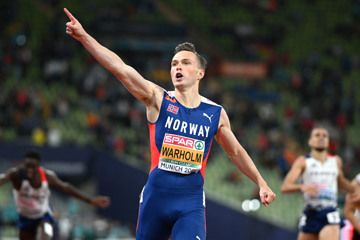