Sifan Hassan and Ali Kaya delivered dominant performances to win the senior titles at the European Cross Country Championships in the French town of Hyeres on Sunday (13).

The senior men’s and women’s races saw Kaya and Hassan stamp their class on their respective fields on a day of fast and furious racing.

Hassan surprised many by dictating the pace from early on in the women’s race. The world 1500m bronze medallist was in no mood to wait around, even over 8km. But the Dutch athlete almost paid the price for her impatience.

“At the beginning, I wanted to win, of course, at least to do my best,” said Hassan. “When the race started, as a 1500m runner, the pace was too slow for me, it seemed really easy, so I kicked. But then, it became harder and harder. The hills were difficult to go up and I got tired. The last kilometre was really very, very difficult.”

Spain’s Trihas Gebre tried to go with the searing pace set by the flying Dutch woman but eventually faded to 11th. Britain’s Steph Twell and Kate Avery were in the chasing bunch along with Norway’s Karoline Grovdal and Ireland’s two-time winner Fionnuala McCormack (nee Britton).

“I think maybe Hassan threw people with her race plan,” said McCormack, who just missed out on a medal in fourth. “I’m not sure but I thought with her track speed she would have had no need to be tearing off at the start.”

Avery took silver for the second year in succession but was ultimately delighted with her performance, given her personal circumstances.

“It was a totally different race from last year,” said the Brit who edged Grovdal for the silver by two seconds. “I feel like I really had to build up for that second place. I did not really expect to be here. My dad recently passed away. He was my biggest support. I thought a lot about him today.”

There was no surprise in the team race with Great Britain winning on 33 points ahead of France in second and Ireland in third.

Another gold for Turkey

The men’s 10km started off as a repeat of last year’s race in the ski resort of Samokov when Turkish duo Ali Kaya and Polat Kemboi Arikan were locked together with Spain’s two-time winner Alemayehu Bezabeh.

The trio looked set to be the three medallists once more and were a class above the field, setting a scorching pace on the deceptively tough firm and fast course that their continental rivals could not match. But it was last year’s champion Arikan who cracked, leaving it to Kaya and Bezabeh for gold.

Bezabeh looked smooth and controlled as he traversed the rolling hills and led past halfway, potentially on his way to a hat-trick of titles.

But Kaya, who won the 5000m and 10,000m double at the European Under-23 Championships in Estonia last summer, was determined to win gold and ultimately cruised to victory, waving to the large crowds on his way to the finish.

“I am very happy because I finished second last year,” said Kaya on turning silver into gold. “It was important for me to win today. I planned to kick on the last lap and that's exactly what I did.”

Bezabeh had to settle for the silver but with Arikan dropping out it left his compatriot Adel Mechaal the opportunity to take bronze as the Spaniards romped to the team title. With Ayad Lamdassem finishing fourth and Ilias Fifa taking fifth, Spain’s winning score of 14 was the lowest ever in the history of the championships.

Carton and Davies take under-23 titles

Belgium’s Louise Carton impressed in winning the women’s under-23 race ahead of the Netherlands’ Jip Vastenburg in second and Serbia’s European under-23 1500m champion Amela Terzic garnering bronze.

“This is amazing,” said the Belgian who controlled most of the race from the front. “I knew I was strong but the other girls are strong as well and I didn't know how they would perform. I was feeling good anyway. During the race, I wanted to take the lead to extend the gap because I felt like I was in control.”

Great Britain won the team title with France in second and Italy third.

Jonathan Davies wouldn’t quote directly what he was thinking as he sprinted down the home straight in the Hippodrome in Hyeres ahead of Spain’s Carlos Moya to win gold in the men’s under-23 race but his tactics worked to perfection.

“I can’t tell you exactly what I was thinking,” joked Davies afterwards on his sprint to the line. “My plan was to sit in and kick towards the end and it worked out perfectly.”

Germany’s Amanal Petros was somewhat of a surprise in third on his international debut. Spain edged Great Britain by two points for the team title with France in third.

Germany's Konstanze Klosterhalfen won the junior women’s 4km in 13:12, causing a surprise ahead of her favoured country woman Alina Reh and becoming the first German woman to win the junior title.

Britain’s Harriet Knowles-Jones also upset the apple cart in second with Reh, who won the 3000m and 5000m at this year’s European Junior Championships, having to settle for bronze after a poor start.

Germany denied Britain their sixth team title in succession with Denmark in third.

Italy’s Yemaneberhan Crippa retained his junior men’s crown with a dominant performance. Last year Crippa took advantage of Russian Alexsandr Novikov’s mistake when he miscounted the laps, but there was no doubting the Italian’s class this year.

“I am very happy,” said Crippa. “It was not easy today. The course was very tough but it was very nice as well. This is the best race of my career.”

France’s Fabien Palcau was the best of the rest in second with Spain’s El Madhi Lahoufi third. There was joy for France winning team gold ahead of Italy and Great Britain.

With nine medals, three of them gold, Britain topped the overall medals table.

BACK
Pages related to this articleAthletes
Jonathan Davies 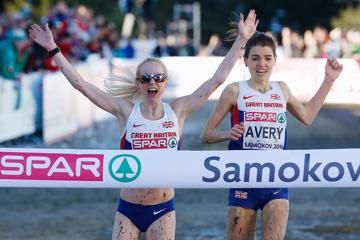