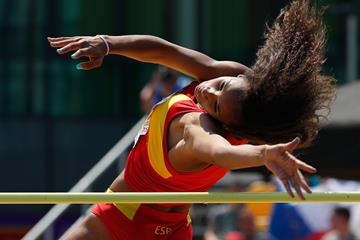 Vicente breaks world U18 heptathlon best at European U18 Championships

Spanish heptathlete Maria Vicente added the continental crown to the world U18 title she won last year, scoring a world U18 best of 6221 at the European U18 Championships in Gyor on Friday (6).

Her winning tally added 35 points to the previous mark of 6186 that was set by Ukraine’s Alina Shukh at the inaugural European U18 Championships in the Georgian capital Tbilisi two years ago.

Vicente started off as the gold medal favourite in the wake of her Nairobi gold medal and her world indoor U18 pentathlon best this winter. That expectation was enhanced with a 13.25 win in the opening event, the 100m hurdles, the best time by a European in this age group this year.

The high jump saw her clear 1.72m, just three centimetres below her best, and then Vicente improved her shot put best by 69 centimetres to 13.77m. Vicente, who hails from Barcelona, then finished off the first day in fine fashion when she went under 24 seconds for the first time with a 200m run of 23.78.

Her first day total of 3747 was special, no doubt about it, and she had a 238-point lead over her nearest rival but there was still the nagging feeling that Shukh’s record might be beyond her grasp. However, all the doubters were to be proved wrong. Vicente started the second day by adding eight centimetres to her recent long jump best when she flew out to 6.37m, breaking the outright championship record for the individual event in the process. But what brought the halcyon figure of 6200 points into view was a stunning improvement in the javelin.

She tore through the first lap in 1:07.06 and although she inevitably tired towards the end and slipped back to third at the finish, her time of 2:23.29 was more than enough to take her event into new territory.

Spain – having not won a gold medal in Tbilisi – actually celebrated two gold medals within the space of 10 minutes in Gyor as just proceeding Vicente’s final event Yasiel Sotero took the honours in the boys’ discus with a championship record of 64.31m.

Despite a downpour, Sotero’s big throw came in the third round but the teenage talent from Gran Canaria dominated the competition with all his four valid throws going farther than 61 metres while no other boy managed to throw beyond 60 metres.

In similar fashion to Sotero, Ukraine’s Valeriya Ivanenko was equally dominant in the women’s hammer.

With torrential rain starting midway through the evening session on Friday making the throwing circles far from optimal, the damp conditions meant Ivanchenko was more than a metre shy of her championship record of 74.36m set in Thursday’s qualifying rounds – the third best U18 performance ever. But her opener of 73.25m saw her win by more than three metres.

The inclement conditions seemed to be a contributing factor to several shocks.

Sweden’s Tilde Johannsen took advantage of a huge gusting wind of 4.3m/s on her back to leap out to 6.33m in the girls’ long jump in the opening round and she stayed in front all the way through the rest of competition. Italy’s Larissa Iapichino, the daughter of two-time world champion Fiona May and the top girl in Europe this summer, struggled to find her best form and finished down in seventh with a modest 6.12m.

The form book was also torn up in the girls’ 100m when Gudborg Jona Bjarnadottir got a rare international victory for Iceland, winning from lane eight after getting the verdict in a blanket finish in 11.75. Joint silver medallists Pamera Losange and Boglarka Takacs, from France and hosts Hungary, were given the same time as Bjarnadottir but split on the photo-finish. The arguable favourite, Ireland’s Patience Jumbo-Gula, never recovered from a wretched start and had to settle for fifth.

Ireland did, however, taste glory in the girls’ 3000m when Sarah Healy won in convincing fashion by almost six seconds in 9:18.05.

Healy will try to get her second gold in Gyor on Sunday in the 1500m final, the event at which she won at the European Youth Olympic Festival 12 months ago, and she is on paper more than 10 seconds quicker than any of her rivals.

Equally impressive as a winner but Healy’s polar opposite in terms of physique was the Belarusian shot putter Aliaksei Aleksandrovich, who twice improved the world U18 lead with the 5kg implement en route to getting his gold medal.

After briefly relinquishing his lead from the first three rounds when Italy’s eventual silver medallist Carmelo Musci reached 20.37m in the fourth round, with the very next put of the competition Aleksandrovich sent his shot out to 20.84m. Then, with the gold medal already won, produced a massive heave of 20.97m with the last effort of the competition.

The first gold medal of the championships went to Belarusian Hanna Zubakova, who took control of the girls’ 5000m race walk on Thursday morning after little more than a lap of the track and she strode away to win by almost a minute, crossing the line in 22:45.47.

The other gold on the opening day went to Great Britain’s Thomas Keen, who fulfilled his role as the boys’ 3000m favourite after going to Hungary as the fastest U18 in Europe. He went through the gears from the bell and won in 8:27.38.