Niklas Kaul has got an impressive list of accolades to his name for a combined events exponent of just 21 years of age, but the German decathlete made a further step forward when he won the European U23 crown in a championship best of 8572 in Gavle on Sunday (14).

Not only did his score beat Andrei Krauchanka’s 2007 mark by 80 points, it also improved his own personal best by 236 and moved him up to second place on the 2019 world list.

If he can score a similar tally at the IAAF World Athletics Championships Doha 2019 later in the summer, it’s certainly well within the bounds of possibilities that he could become the youngest ever decathlon medallist at the World Championships.

The key to his impressive tally was a massive javelin effort of 77.36m in the penultimate event, itself a decathlon championship best and a lifetime best for Kaul by nearly five metres.

Only twice before, both times by Cuba’s Leonel Suarez, has that mark been bettered in a decathlon scoring in excess of 8000 points and it propelled Kaul to the top of the decathlon standings in Gavle ahead of Estonia’s Johannes Erm for the first time in the competition.

It meant that Kaul had a 17-point advantage going into the final event, the 1500m, in which he had a significantly faster personal best. He then clocked 4:17.63 to win the title.

Despite a slightly disappointing 110m hurdles of 14.83 on Sunday morning, he bounced back with a 47.35m discus and then a near-best 4.80m in the pole vault before finishing off his decathlon in stunning fashion.

“Today was a perfect day; the discus, pole vault and javelin were all really good. During the past three years I had an elbow injury so it's great to finally throw well. In the 1500m, I could relax a bit but I'd looked at what the championship record was before the competition and I thought I could maybe break it.”

Erm kept his nerve to also throw a personal best in the javelin, an improvement of more than three metres to 59.60m, and finish in a lifetime best of 8445 – leading from the second to eighth event – but could do nothing to contain Kaul on the second day.

Mrzyglod, like Kaul a winner at the European U20 Championships two years ago, had been just one centimetre behind Romania’s Alexandru Novac going into the final round, throwing 81.74m in the second round to hold the lead until the latter threw 81.75m with his penultimate effort.

But Mrzyglod consolidated his growing reputation as a man who responds under pressure by sending his final throw out to 84.97m for a Polish U23 record.

Moller took the 3000m steeplechase gold medal on Saturday by running an even-paced race of such high quality that she crossed the line in 9:27.31, finishing more than 24 seconds in front of her nearest rival despite the fact that the three women behind her all ran personal bests. Into the bargain, she took more than eight seconds off the championship record.

On the final day she returned to the track to duel with Germany’s Alina Reh over 5000m.

The 10,000m winner tried to break Moller with a brutal early pace and reached 3000m in 9:09.05 but couldn’t shake off the Dane. Moller threw in a decisive change of pace at the bell to clinch her second gold medal in a national senior record of 15:07.70.

Moller was one of three athletes to win a brace of individual titles in Gavle.

Double wins for Reekie and Gressier

Great Britain’s Jemma Reekie won the 800m in 2:05.19 on Saturday and then returned to the track on Sunday to take the 1500m in 4:22.81, both times utilising her devastating finishing speed to superb effect.

France’s Jimmy Gressier was pushed far harder in the 5000m on Saturday than he had been to win over 25 laps of the track on the opening night two days before, but managed to hold off his compatriot Hugo Hay in a duel down the home straight, the pair clocking 14:16.55 and 14:17.00 respectively.

Further gold for Les Bleus came via Fabrisio Saidy and Wilfried Happio who won the 400m and 400m hurdles in personal bests of 45.79 and 49.03 respectively.

Saidy, who got an early present as his win on Saturday came just two days before his 20th birthday, was one of a small number of champions with 1999 birthdates, meaning they will be eligible to defend their titles in two years’ time when the championships will be held in Bergen, Norway.

Germany’s Bo Kanda Lita Baere, another athlete born in 1999, was the only man over 5.65m in the pole vault.

Perhaps the most dramatic finish came in the men’s 20km race walk. Turkey’s Salih Korkmaz led from the outset and had built his lead up to a full minute at 16 kilometres. With just the final two-kilometre circuit to go, his lead over Vasiliy Mizinov was at 58 seconds and he was seemingly on course for gold.

But just before passing the checkpoint for the final kilometre, he was clearly having stomach problems, stopping twice before starting again.

Having seen what was happening, Mizinov seized his chance and started to steadily reel in the faltering Turk before finally catching him about 50 metres from the line and winning by three seconds.

Mizinov won in 1:21:29 but, as some consolation, Korkmaz’s time of 1:21:32 was a national senior record and added to Turkey’s medal haul which included a women’s 20km race walk win from the diminutive Ayse Tekdal in 1:34:47 earlier on Sunday.

Another Turkish record fell to triple jumper Necati Er who bounded out to a winning distance of 17.37m to move up to second on the 2019 European list and eighth on this year’s world list.

The women’s long jump also provided fireworks, not least in the qualifying competition on Saturday which saw France’s Hilary Kpatcha add 20 centimetres to her personal best when she flew out to 6.81m while her highly-rated compatriot, and defending champion, Yanis David crashed out without even getting beyond six metres.

In the final on Sunday, Kpatcha showed her performance the day before was no fluke when she reached 6.73m in the first round, a distance that eventually sufficed for victory.

One jumps champion who did retain her title from two years ago was Ukrainian high jumper Yuliya Levchenko, who cleared two heights better than anyone else to win with 1.97m. 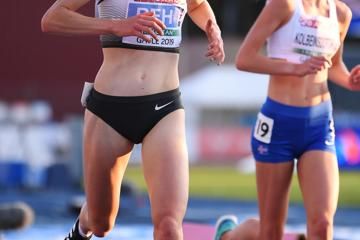 Championship records for Reh and Herman at th...