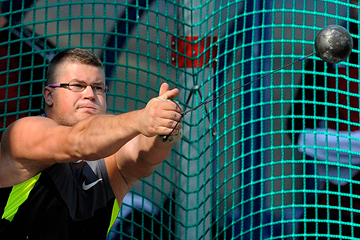 Pawel Fajdek extended his own world lead in the hammer at the 43rd edition of the Hallesche Werfertag, the annual two-day throws meeting in Halle, Germany, on Saturday (20).

Opening with a pair of fouls, the world champion took the lead in the third round with 77.12m before securing it with an 82.31m effort in round five, the seventh farthest of his career. He underscored his early season form with an 81.68m throw in the final round.

The 27-year-old Pole handily defeated Olympic champion Dilshod Nazarov, who reached 77.11m in the third round of his 2017 debut. Nick Miller of Great Britain was third with 76.81m.

Meanwhile, Fajdek's compatriot Anita Wlodarczyk extended her unbeaten streak to 32 straight victories. The world record holder notched her 76.32m afternoon's best in the second round, although all but one of her six throws were better than runner-up Wang Zheng's 72.78m best.

Daniel Stahl of Sweden won the discus with 68.07m to solidify his No.2 spot on the 2017 season's world list. It was the 24-year-old Swede's third farthest effort of the season to defeat Lithuania’s Andrius Gudzius who topped out with 66.70m. Austria’s Lukas Weisshaidinger was third at 66.52m with world champion Piotr Malachowski of Poland fourth at 65.41m, season's bests for both.

Two-time world shot put champion David Storl won his event's A pool with 20.63m, but the past throw of Saturday's main action came in the B pool, won by Czech Tomas Stanek. The 25-year-old European indoor silver medallist reached 21.35m with three additional throws sailing beyond the 21-metre line.

And in javelin action, Christin Hussong beat back world champion Katharina Molitor 61.91m to 60.27m in the women's main event while Berhard Seifert topped Lars Hamann in the men's, 81.10m to 80.85m.

The two-day competition concluded on Sunday with a busy programme that included mostly U18 and U20 events.