Mo Farah and Vivian Cheruiyot notched convincing victories at the 36th running of the Great North Run on Sunday (11).

Farah broke from Dathan Ritzenhein with just over a mile to go to coast to a 1:00:04 performance to win the Newcastle-to-South Shields race for the third consecutive year.

In the women's contest, Cheruiyot, who won Olympic gold in the 5000m and silver in the 10,000m in Rio, out-sprinted fellow Kenyan Priscah Jeptoo over the final 200 metres to clock 1:07:54 in her half marathon debut on her 33rd birthday.

Farah’s victory came just 22 days after he concluded his historic Olympic double-double triumph in Rio de Janeiro where he successfully defended both his 5000m and 10,000m titles.

“To be honest with you, I’m knackered,” Farah told BBC Sport.

“I knew I had to work hard because Dathan is a former training partner and was running a great race. He put his foot down and tried to get rid of me because he knew I have amazing pace.”

This was Farah’s first race since his Olympic 5000m victory on 20 August.

It didn't take long for the contest to become a three-man affair, with Farah, Ritzenhein of the US and Kenyan Emmanuel Bett well ahead after just four miles. Bett and Farah were running nearly even through 10 kilometres in 28:32, while Ritzenhein, who led early on, appeared to be struggling to maintain contact after the downhill sixth mile. But he soon regrouped to once again work his way to the front.

Ritzenhein, who is training for November’s New York City Marathon, continued his strong tempo at the front, one that knocked Bett out of contention shortly after 15 kilometres.

Farah didn't make his final move until the duo began their descent down a steep incline with less than two kilometres remaining. Farah's surge was clear and decisive, as he quickly built an insurmountable gap en route to an eight-second victory over his former training partner.

Debutante Cheruiyot displays the patience of a veteran

After a sluggish opening few miles in the women's race, the lead pack was eventually reduced to five through mile five: Cheruiyot, Jeptoo, Joyce Chepkirui, Tirunesh Dibaba and Australian Eloise Wellings. The 4:57 sixth mile proved too much for Wellings, leaving the remaining quartet to take turns with the lead over the next few miles.

Fifty-four minutes into the race only Cheruiyot and Jeptoo remained, with the former closely shadowing the latter after the pair broke from Dibaba, the winner of this race in 2012, who was desperately trying to maintain contact from about 10 metres back. The Ethiopian made up some of the deficit but paid for it soon after when she was dropped for good with about 800 metres to go.

Jeptoo upped the tempo in the waning stages but began her breakaway attempt too early, allowing Cheruiyot to pounce 200 metres from the finish.

IAAF President Sebastian Coe was on hand to serve as a starter for the race along with two-time Olympic 800m champion David Rudisha, who won a 500m race in the Great North CityGames competition a day earlier. Coe also presented the medals to the winners. 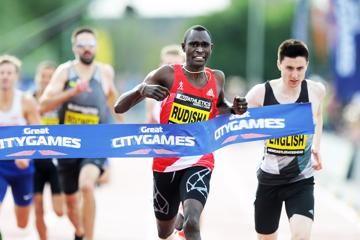