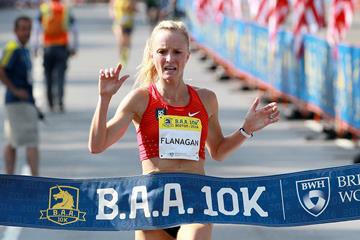 On a picture perfect summer day, Massachusetts native Shalane Flanagan cruised to a USA 10km record on the roads at the sixth annual BAA 10K, running 30:52 at the IAAF Bronze Label Road Race in Boston on Sunday (26).

Preparing for the Rio 2016 Olympic Games marathon later this summer, the 34-year-old Flanagan improved her own NACAC area record set last year in the Dutch city of Tilburg by 11 seconds and improved the women’s course record in Boston by 12 seconds, the previous mark being 31:04 by Ethiopia’s Marmitu Daska two years ago.

"There's just nothing better than hearing the chants of 'Go USA!'" reflected the 2008 Olympic Games 10,000m bronze medallist who was also sixth over 25 laps of the track at the IAAF World Championships Beijing 2015.

"There's just nothing better than running at home before we go and represent our country in Rio.

"Doing it here, on my own streets, my town, my home, today is a day for sure I will remember for a really long time. I've had a lot of great highlights in my career, but today will be certainly one of them."

Flanagan, who currently trains in Portland but hails from the nearby twon of Marblehead, pushed the pace hard from the gun and passed the halfway point in 15:29, but could not quite shake off Kenya’s two-time world marathon champion Edna Kiplagat, who was just one second behind, with Flanagan’s training partner Amy Cragg a further six seconds in arrears.

Passing through 8km in 24:45, Flanagan still had Kiplagat breathing down her neck but managed to pull away over the final two kilometres.

In slightly different fashion, the men's race was a battle all the way until the final turn, when Kenya's Daniel Chebii took off from compatriots Philip Langat and defending champion Daniel Salel before crossing the line in 27:55 on his US road racing debut.

Langat was second in 28:02 and Salel another six seconds back. Dathan Ritzenhein was the first US runner home in fourth place, clocking 28:12.

"My tactics were successful, because I was able to go with the guys until 5K, and after 5K we were running down a pace that was comfortable to me," said Chebii. "When I was in something like 8K, I knew totally that I was going to win. When I reached 9K, I started to push it."

In total, 7805 runners finished this year's BAA 10K, the largest in the event’s history.