Michael Githae was victorious at the 75th and final edition of Fukuoka International Marathon on Sunday (5), winning the World Athletics Elite Label road race in 2:07:51.

The half-way point was reached in 1:02:41, meaning an attack on the 2:05:18 course record was not out of the question. Simon Kariuki and Charles Wanjiku kept the pace going at the start of the second half, and 30km was reached in 1:29:08. But the pacemakers dropped out soon after, and the pace dramatically slowed down.

Nevertheless, the pack became strung out to almost a single file, and by 34km just Githae, James Rungaru, Hosoya and Ryu Takaku remained in contention. Soon after, Githae surged and Hosoya made a valiant effort to stay close but Githae gradually pulled away to win by 25 seconds in 2:07:51.

In third, Rungaru set a PB of 2:08:25, while fourth-placed Shohei Otsuka and Ryu Takaku and Daisuke Uekado in fifth and sixth respectively were just outside their PBs. Yuki Kawauchi, running his 12th Fukuoka Marathon, fittingly finished 12th in 2:11:33. He is planning on running the Hofu Marathon in two weeks’ time.

Looking back at Fukuoka's history

The Fukuoka International Marathon – which was awarded a World Athletics Heritage Plaque in 2019 – started in 1947 and is the second oldest marathon in Japan behind the now defunct Lake Biwa Marathon.

De Castella isn’t the only global marathon champion to have contested the race over the years. Frank Shorter, the 1972 Olympic champion, notched up four consecutive Fukuoka Marathon victories between 1971 and 1974. 2000 Olympic champion Gezahegn Abera won in 1999, 2001 and 2002, while 1996 Olympic champion Josiah Thugwane won in 1997. The late Samuel Wanjiru, winner of the 2008 Olympic title, made a remarkable marathon debut in Fukuoka in 2007, winning in 2:06:39. And two-time world champion Jaoud Gharib won in 2010.

When asked about the end of the Fukuoka Marathon, four-time winner Seko said: “It is like part of my history is being erased.”

Japan Running News, a leading authority on the sport in Japan, has produced a docu-film on the Fukuoka Marathon, entitled ‘Inside the Outside – When the World Came to Fukuoka’.

BACK
Pages related to this articleAthletes
Michael Mugo Githae 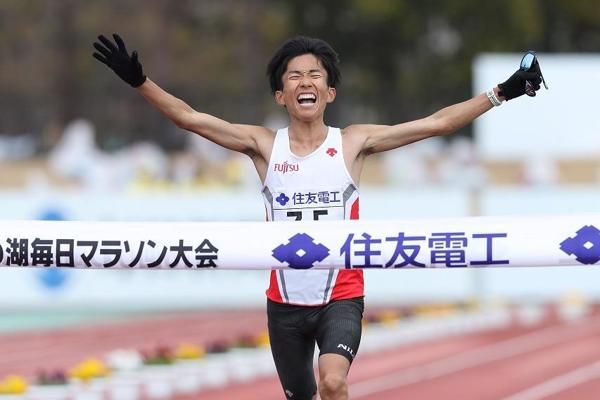