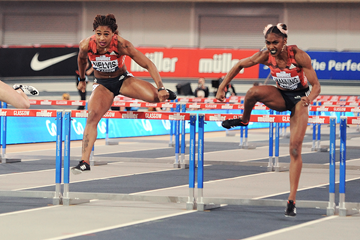 In typical fashion for the closest rivalry in athletics, US sprint hurdlers Christina Manning and Sharika Nelvis were tied on points in the IAAF World Indoor Tour standings at the end of the Muller Indoor Grand Prix Glasgow on Sunday (25).

Only the tie-break rule could separate the pair. And Manning, who owns the best performance of the duo from the World Indoor Tour, was duly announced the winner of the US$20,000 bonus and wild card for the IAAF World Indoor Championships Birmingham 2018.

Manning got out best in the 60m hurdles final. Nelvis, who stumbled at the start of her heat, was closing in on her compatriot with each flight of barriers but couldn’t quite get on level terms. Manning crossed the line in a stadium record of 7.79 with world leader Nelvis taking second place in 7.84.

In any other rivalry, five hundredths would be considered a narrow gap. But for Manning and Nelvis, it’s the biggest margin that has separated the pair in all of their 60m hurdles races so far this year.

“I came out here for the win,” said Manning. “I needed the win to claim the tour title and I got it. It’s always good to run close to your personal record. I wasn’t expecting a fast time like that, but I’m glad I got it. I’m just going for a medal [at the World Indoors].”

In many ways, today’s outcome acted as an equaliser. While Manning emerged from Glasgow as the World Indoor Tour winner, Nelvis still owns the world-leading mark with her North American record of 7.70 from the US Indoor Championships.

It sets the scene for a thrilling climax to the indoor season at next week’s World Indoor Championships.

It might be a rarely-contested event, but the world all-time list for the 3000m race walk features so many stars of the discipline that it’s clear the world best of 10:31.42 is a quality mark.

But heading into Glasgow, Britain’s Tom Bosworth believed it was also breakable.

As has now become customary in his track races, Bosworth dropped the rest of the field fairly early on in the race. He covered the first kilometre in 3:31.54 and the second in a near identical 3:31.95, putting him just outside record schedule.

But he also had two red cards going into the latter stages of the race. “That made me concentrate more,” Bosworth said afterwards. “And that helped me to go faster.”

“I can’t believe it,” said Bosworth. “I’m over the moon to get a world record but I feel sick after that.”

When double Olympic champion Elaine Thompson and two-time world 200m champion Dafne Schippers finished well off the pace in the heats of the women’s 60m, spectators were left scratching their heads and assumed the duo were saving something for the final.

But, if anything, the results of the final reaffirmed the marks in the heats. Marie-Josee Ta Lou of the Ivory Coast finished a fraction ahead of Britain’s Dina Asher-Smith, running a stadium record of 7.07 to win by 0.02. The pair had earlier won their heats with respective marks of 7.16 and 7.08.

Thompson, meanwhile, was a stride behind in third, clocking 7.12. Schippers was never truly in contention and was fifth in 7.22.

Su Bingtian did what he needed to do to secure the World Indoor Tour victory in the men’s 60m.

The Chinese sprinter didn’t have to improve on the Asian record he has lowered twice already this season; instead, a 6.50 clocking – equalling the Scottish all-comers’ record – was sufficient to hold off USA’s Mike Rodgers by 0.04. Just five hundredths separated the other six men in the field.

The men’s 60m hurdles was won by an athlete who had never competed indoors before today.

Jamaica’s Ronald Levy broke through to world-class level last year, winning at the IAAF Diamond League meeting in Paris with 13.05. Given there are no indoor facilities in Jamaica, the 25-year-old had only ever raced outdoors. But, after a clear 7.49 victory in Glasgow, he will now head to the World Indoor Championships with realistic medal ambitions.

Levy started strongly and by the end of the race had a 0.09 winning margin over USA’s Aries Merritt. Britain’s European indoor champion Andrew Pozzi, undefeated at 60m hurdles since 2014, had to settle for third in 7.60, while US indoor champion Jarret Eaton failed to finish after falling into the third hurdle.

Just one point separated Ivana Spanovic and Sosthene Moguenara in the World Indoor Tour long jump standings ahead of Glasgow. Moguenara finished ahead of Spanovic to take the series victory, but they were both upstaged by Sweden’s Khaddi Sagnia.

The 23-year-old flew out to an outright lifetime best of 6.92m with her first leap of the competition, equalling the Swedish indoor record set by heptathlon legend Carolina Kluft in 2004 and breaking the Scottish all-comers’ record. Spanovic responded with 6.81m with the very next leap in the jumping order, then Moguenara improved to 6.83m in round two, but neither could catch Sagnia.

After missing out on a World Indoors team spot at the recent US Indoor Championships, 400m runner Fred Kerley may have felt that he had something to prove in Glasgow. This time he ensured he got to the break first, going through 200m in 21.95, and then maintained his lead to the end.

Kerley crossed the line in a stadium record of 45.86, winning comfortably from Slovenia’s Luka Janezic, who clocked 46.29.

Kenya’s Beatrice Chepkoech knew that a strong performance in Glasgow could elevate her to the top of the women’s 1500m World Indoor Tour standings.

The steeplechase specialist made no mistakes and followed the pacemaker for the first few laps before opening up a significant gap over Ethiopia’s Axumawit Embaye in the second half of the race. She crossed the line in 4:02.21 to take two seconds off the Kenyan indoor record she set earlier this year.

A last-lap burn-up in the men’s 3000m was a predictable outcome, but few would have expected Kenyan teenager Justus Soget to be the athlete who crossed the line first.

Running against a field that included world indoor champion Yomif Kejelcha of Ethiopia and USA’s Olympic 5000m silver medallist Paul Chelimo, Soget was one of four men who were still in contention at the bell. Chelimo edged into the lead with half a lap remaining, but Soget look the long path round the outside.

Soget stole victory on the line from Chelimo by one hundredth, clocking a Scottish all-comers’ record of 7:39.09. Kejelcha finished third in 7:39.36 and, in doing so, won the World Indoor Tour.

One of the most familiar sights of this year’s World Indoor Tour has been Poland’s Adam Kszczot charging around the final bend to win the 800m.

The three-time European indoor champion – who had already done enough before Glasgow to secure the World Indoor Tour title – used his trademark tactics to great effect once again, overtaking his opponents in the final 100 metres to win in 1:47.15. He was followed home by compatriot Marcin Lewandowski, 1:47.50, and Britain’s Jake Wightman, 1:47.69.

Bethwell Birgen, another regular and consistent performer on the international circuit, timed his finish well to lead a Kenyan 1-2 in the men’s 1500m. He and Vincent Kibet held off a spirited challenge from Australia’s Ryan Gregson to take the top two spots, running 3:37.76 and 3:37.88 respectively to Gregson’s 3:38.00.

Greek pole vaulter Ekaterini Stefanidi owns one of the longest active winning streaks in athletics, but it came under serious threat by compatriot Nikoleta Kiriakopoulou.

The world and Olympic champion entered the competition at 4.65m but needed two attempts to succeed. Kiriakopoulou, meanwhile, got over it on her first try to hold the lead going into the next height, 4.75m.

Both women failed their first two attempts. Kiriakopoulou then missed for a third time and exited the competition, but still held the upper hand, leaving Stefanidi with one effort with which to steal back the lead – and maintain her winning streak.

As she often does in high-pressure situations, Stefanidi responded brilliantly with a clean third attempt. She ended her series with three unsuccessful tries at 4.84m, but seemed happy enough to leave Glasgow with her winning streak still intact.

Stefanidi wasn’t the only world champion to extend a winning streak. Maria Lasitskene won the high jump with customary ease, enjoying first-time clearances up to and including 1.95m – the height at which the last of her competitors, Morgan Lake, exited the competition. Lasitskene failed her three attempts at 2.00m, but her victory was enough to seal the World Indoor Tour winning bonus US$20,000.

China’s Shi Yuhao left it late to take the lead in the men’s long jump. The recently-crowned Asian indoor champion sailed out to 8.13m, the only eight-metre jump of the competition, to move from fifth to first in the final round. Jamaica’s Damar Forbes finished second on countback from China’s Huang Changzhou, both with a best of 7.99m.

Elsewhere, USA’s Phyllis Francis showed the same finishing strength that carried her to the world title last year, winning the 400m in 52.00. Latvia’s Liga Velvere employed similar tactics to take the 800m in a national indoor record of 2:02.01.