World shot put champion Gong Lijiao collected her third consecutive gold medal at the Chinese National Games in Tianjin on Wednesday (6), which marked the last competition of her 2017 season.

The 28-year-old Gong dominated the competition as expected, throwing beyond 19 metres four times with her 19.46m best coming in the final round. In fact, each of her six throws was good enough to guarantee the gold.

Guo Tianqian, former world youth and junior champion in 2011 and 2014 respectively, took the silver at 18.20m and Liu Xiangrong, who was fifth at the 2012 Olympic Games, grabbed the bronze with a final toss of 18.12m.

“Although the result was not very good, winning the gold medal is a perfect way to end the season,” said Gong, who not only cruised to the top podium at the World Championships in London last month, but also became the first Chinese to claim an IAAF Diamond trophy two weeks ago.

“It is the end of the season but this year is just a start for me. From next year, I will be preparing for the 2020 Olympic Games in Tokyo. My goal is nothing but the gold medal.”

The 31-year-old hurled a season best of 75.48m with her third attempt to wrap up the win in what was the last competition of her career.

“I am still good in terms of techniques and mental strength. But my body just cannot withstand it,” Zhang said. “With all these injuries, I can barely keep training. It’s time for me to spend more time with my family.”

“To my great pity, I have not won any gold at the World Championship or the Olympics. But I believe these young throwers in China can realise this dream for me,” said Zhang, who has earned one silver and three bronze medals in nine World Championships, as well as two silver and one bronze in four Olympic Games.

Sprinter Zhang Peimeng also confirmed his retirement after he won the 4X100m gold medal in 38.16, together with Wu Zhiqiang, Xie Zhenye and Su Bingtian, the same quartet that finished fourth in London last month in 38.34.

It was the third gold medal pocketed by Xie this week, who also won the men’s 100m and 200m events with career bests in Tianjin.

The men’s long jump final saw a deep field as seven out of the 12 jumpers have PBs over 8.10m. Huang Changzhou, bronze medalist at the 2016 World Indoor Championships, bounced back from his disappointing journey in London last month where he failed to reach the final. The 23-year-old achieved a PB of 8.28m in the second round to seal the victory.

Xue Changrui, who set a national record of 5.82m to finish fourth in the men’s pole vault in London, retained his solid form on Thursday evening. After clearing 5.30m, 5.50m and 5.60m with a clean sheet to secure the gold medal, he tried to renew the national record again, but failed to clear the bar at 5.85m.

Xue’s teammate Zhang Wei took the silver at 5.50m, followed by Yao Jie who also cleared 5.50m but had to settle for third on count-back.

BACK
Pages related to this articleAthletes
Wenxiu Zhang 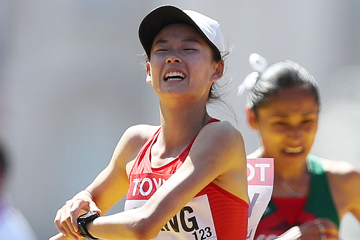 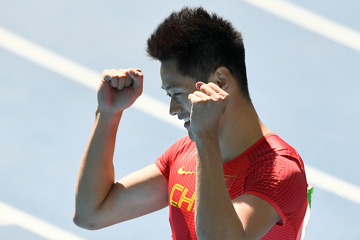