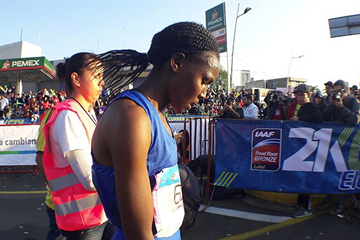 Kenya's Diana Chemtai Kipyokei established a course record of 1:10:00 to win the 32rd Guadalajara Half Marathon, while John Nwangangi took the men’s title at the IAAF Bronze Label road race on Sunday (18).

With temperatures hovering at about 13C, 24-year old Kipyokei set out an aggressive pace from the beginning, covering the first part of the race at 3:20-per-kilometre pace.

Having passed through five kilometres in 16:09 and 10 kilometres in 32:19, she went on to stretch her advantage to about 700 metres by the end, eventually winning in 1:10:00. Her time is the fifth fastest half marathon recorded on Mexican soil by a woman.

In the men’s race, Nwangangi and the other leading contenders followed Mexico’s 2011 Pan American Games medallist Juan Carlos Romero, who was running here as a pacemaker and set the tempo at 3:00-per-kilometre for the first 10 kilometres of the race.

Four kilometres later, Nwangangi briefly lost contact with the leaders, but regained his pace and bided his time to finish strong and overtake Kilimo by one second to win in 1:03:49. Fiduka finished third in 1:03:53. Jesus Armando Torres was the first Mexican home in fifth with 1:05:16.

“I did not drop back because of a crisis,” Nwangangi told EFE. “It was strategy. The plan was to save energy and finish strong and it worked out.”

It its 32nd edition, the Guadalajara Marathon drew 15,000 runners in a mass race. It was the last selection race to determine the Mexican team for the IAAF World Half Marathon Championships, to be held next month in Valencia.

Javier Clavelo Robinson and Gustavo Borges for the IAAF