Held at Parliament Hill in North London as part of the Highgate Harriers Night of the 10,000m PBs, Potter lined up alongside fellow Olympians Jess Martin, 2014 European champion Jo Pavey and European 5000m bronze medallist Steph Twell, who was making her track 10,000m debut. The informal but well-supported event allowed spectators to fill the outer six lanes of the track with the runners passing through fan-filled canopies on each of the straights.

Potter, Pavey, Martin, Twell and Katrina Wootton formed an early lead pack with the latter doing much of the front running, going through the half-way point a shade inside 16:15. Twell then took up the running as she and Potter broke free from the rest of the pack.

With about 21 minutes on the clock, Potter moved past Twell into the lead. With each remaining lap, Potter increased her advantage over her fellow Scot, going on to win in 32:04.63, little more than a second shy of her PB.

Potter’s feat was made all the more remarkable, given this was her first track race since last year’s Olympic Games. She had spent much of the winter making a transition towards the triathlon.

Twell finished second in 32:16.23, just one second outside the World Championships qualifying time. Wootton crossed the line in third in 32:27.47 while Pavey was a distant fourth in 32:42.93.

“I felt really comfortable throughout,” said a delighted Potter. “I came in not having raced on the track since Rio. I’ve been doing triathlon training, so I was a bit apprehensive about how it was going to go, but I had confidence in the sessions I’ve done recently.

“It was nice to finish the last 800m not like last year when I was being chased down. This time I just felt stronger and stronger.

“I’m going to carry on doing what I’m doing because I’m improving in triathlon and I’m still doing well in running,” she added. “In training I’m now doing about 13 fewer miles a week, I’m down to about mid-50s now, but I feel like I’m getting my aerobic base from other areas, like the biking and the pool. And it makes my legs a bit fresher, so it’s win-win.”

Andy Vernon, the 2014 European silver medallist, won the men’s race in 28:21.15. The blustery conditions made it difficult to chase the World Championships qualifying time of 27:45, so Vernon made winning his priority.

He opened up a gap with a few laps remaining and, high-fiving spectators gathered on the track for the final lap, Vernon went on to win in 28:21.15. Dewi Griffiths was second in 28:31.88.

BACK
Pages related to this articleAthletes
Elizabeth Potter 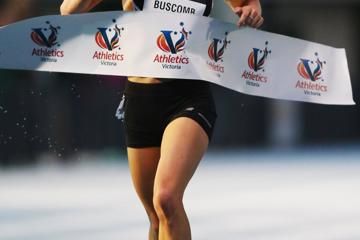