Johnson-Thompson, the 2014 Hypo Meeting winner, currently has 4059 points, three more than Thiam with Germany’s 2016 Combined Events Challenge winner Carolin Schäfer close behind with 4053. It’s the first time in history that three women have ended day one with 4050 points in the same heptathlon.

Meanwhile, defending champion Damian Warner and compatriot Pierce LePage currently hold a Canadian 1-2 lead in the decathlon. Warner, the world silver medallist, ended the first day with 4532 while LePage has 4379.

Thiam was the first to make an impression in the opening event of the heptathlon, the 100m hurdles. Competing in the third of five heats, the Belgian chopped 0.22 off her PB to win her race in 13.34, running into a -0.7m/s wind.

Johnson-Thompson, competing in the next heat, followed it with a personal best of 13.29. But Nadine Visser was even more impressive. The Dutch athlete won the fifth heat with a meeting record of 12.78. Behind her, Schäfer clocked the second-fastest time of the day, improving her PB to 13.09.

In her strongest individual event, Thiam cleared 1.98m on her second attempt to equal her own world heptathlon high jump best and add one centimetre to the meeting record set in 2006 by compatriot Tia Hellebaut. Thiam went on to have three unsuccessful attempts at 2.01m.

Johnson-Thompson cleared 1.95m on her third try to stay within 33 points of Thiam. Yargelis Rodriguez from Cuba cleared 1.86m, the same height as Schäfer, who set a personal best.

As was expected, Thiam extended her lead after the shot put, where she produced a throw of 14.51m. Schäfer moved up one place in the overall standings after throwing 14.76m, just three centimetres shy of her recent PB. Johnson-Thompson managed 12.72m, her best ever within a combined events competition, to hold on to a podium position behind Thiam and Schäfer.

European champion Anouk Vetter’s 15.54m was the best mark of the day and helped her move from 12th to fifth. Her final effort landed beyond the 16-metre line but she stepped out of the circle.

Johnson-Thompson, competing in her first heptathlon since moving to Montpellier to train with Olympic silver medallist Kevin Mayer, won the 200m in an impressive 22.81 into a headwind of -2.9m/s. It was enough to give her the overnight lead with 4059, three points ahead of Thiam, who improved her PB to 24.40 despite a headwind of -1.6m/s.

In a close competition for the top three positions, Schäfer ended the first day in third place with 4053 after improving her PB by 0.01 to 23.36.

“I had a couple of tough years and I just want to fall in love with heptathlon again,” said Johnson-Thompson.

“I have no words,” added Schäfer. “Everything is going easily. I have tried to keep the momentum after setting a PB in the 100m hurdles. I am happy with how I am improving. That’s the most important thing. I focused on speed in training and I am working on the jumping events.”

Warner on course for third victory

Olympic bronze medallist Damian Warner got off to a strong start by clocking 10.35, the second-fastest time ever run in Götzis behind his own meeting record of 10.15 set last year. Fellow Canadian Pierce LePage narrowly missed his personal best by 0.03 with 10.49 to finish second, ahead of Germany’s Rico Freimuth (10.53).

Warner also performed well in the long jump where he leapt to 7.85m, his best ever leap within a decathlon, to increase his lead. LePage jumped 7.64m to take second place with a gap of 26 points over Dutchman Eelco Sintnicolaas, who leapt to 7.61m. Ukraine’s Olesksiy Kasyanov followed in fourth place after jumping 7.63m. Freimuth ended the second event in fifth place overall after producing a jump of 7.47m.

Freimuth moved up to second place in the overall standings after finishing third in the shot put with 15.21m. Warner put 14.09m to maintain his lead, while Sintnicolaas ranked in third after a best release of 14.62.

Estonia’s Maicel Uibo, the husband of 400m Olympic champion Shaunae Miller-Uibo, recorded three no-throws in the shot, but bounced back to win the high jump with a clearance of 2.15m. Poland’s Pawel Wiesolek set a PB of 2.12m to move from 13th to fourth overall.

LePage also improved his PB to 2.09m to move back into second place overall behind Warner, who cleared 2.03m. After a clearance of 2.00m, Kasyanov moved up to third place in the standings.

Warner capped the first day with a 47.49 clocking in the 400m, the second-fastest time of the day behind world indoor bronze medallist Mathias Brugger, who smashed his PB with 47.29.

Kasyanov crossed the finish-line in 48.68 to maintain his overall third place with 4352. Dutch duo Pieter Braun and 2013 European indoor champion Sintnicolaas round out the top five with 4309 and 4301 respectively. 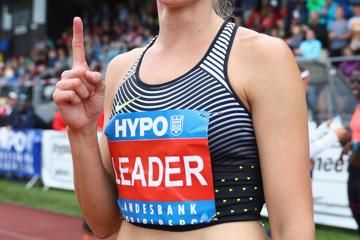 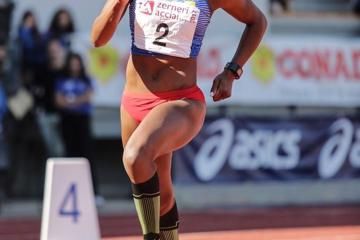