Overnight leaders Katarina Johnson-Thompson and Damian Warner held on to their pole positions at the 45th Hypomeeting in Götzis on Sunday (26), winning at the IAAF Combined Events Challenge meeting with world-leading scores of 6813 and 8711 respectively.

It was a fresh start to day two. The fields were a little lighter than day one with a few athletes retiring from competition: Canada’s Niki Oudenaarden, Germany’s Anna Maiwald and Briton Niamh Emerson in the heptathlon. The most notable absences were the decathlon giants Rico Freimuth of Germany and Eelco Sintnicolaas of the Netherlands. Japan’s Keisuke Ushiro and Switzerland’s Luca Bernaschina also called it a day. But the crowd was entertained by a late entrant as a rabbit took to the track, sprinting across the field and demonstrating remarkably good form around the top bend.

Field animals despatched, the action on the field started in the heptathlon with the long jump. Johnson-Thompson only had one valid jump, in the second round, but it was a solid 6.68m and not bettered by anyone else, allowing her to extend her lead to 5100, with US duo Kendell Williams in second overall with 4819 and Erica Bougard third with 4705.

But the story behind the leaders was the emergence of Sophie Weissenberg as the best performing of the Germans, lodging the best long jump mark among them with 6.38m, but also moving to fourth place overall ahead of Carolin Schäfer in sixth.

Johnson-Thompson and Williams aside, the long jump was dominated by the younger athletes in the field, who accounted for four of the six marks beyond 6.30m. Belgian indoor long jump record-holder Hanne Maudens had the second-longest mark of 6.39m, Spain’s Maria Vicente was fifth with 6.31m, and Cuban Adriana Rodriguez sixth with 6.31m.

While she might have ended the first day less than confident about what lay ahead on day two, Johnson-Thompson had little need to worry. She followed her solid long jump with a personal best in the javelin of 42.92m, the same distance as Williams. Suddenly, the competition became about how far she could go, and whether she could exceed her lifetime best heptathlon score of 6759 set when she took silver at the European Championships last year.

The javelin saw four women throw beyond 50 metres: Swiss Geraldine Ruckstuhl (54.80m), Latvian Laura Ikauniece (54.13m) – who is returning to her best with every competition – Dutch heptathlete Emma Oosterwegel with 52.75m and Schäfer with 51.07m.

After the penultimate event, Johnson-Thompson had a 261-point lead over Ikauniece, but it was close between second and fifth, with only 51 points separating the Latvian, Williams, Schäfer and Hungary’s Xenia Krizsan.

Into the final event and Johnson-Thompson took out the 800m from the front, covering the first lap in 59.41. In the final 200 metres, Bougard caught her, and they tussled in the home straight with Bougard finishing first in 2:08.24. Johnson-Thompson’s time was 2:08.28, taking her to a PB of 6813 to move to 18th on the world all-time list.

Looking forward to the rest of the season, Johnson-Thompson said: “I’m going to take a little break – last year with the Commonwealth Games and my injury, my season was set up where it was a slow build up into Berlin, so this year I’m trying that same approach and we’re building on Götzis and I’m going to take a slow approach and work towards Doha.”

Ikauniece finished in second place with 6476, and Krizsan topped off a strong second day in third with a PB of 6469. The first six women surpassed the qualifying mark of 6300 for the IAAF World Athletics Championships Doha 2019, with Weissenberg just missing out by seven points in the performance of her life to score 6293.

Talking about her first experience of Götzis, Weissenberg said: “It was great, the atmosphere and the crowd. My mum (1990 European silver medallist Heike Tischler) was also here, and she told me everything about when she competed here – she said, ‘it’s so cool and you will love it!’ I’m aiming for the European Under 23s and I will try to make the standard for Doha there.”

It would have been a challenge for the first event on the second day of the decathlon to repeat the scintillating experience of the 100m on the first day, but some elements endured.

European indoor champion Jorge Ureña had a blistering run to win the fifth heat in 13.99, Damian Warner won the final heat with the fastest time overall (13.64), and both Ashley Moloney (14.24) and Manuel Eitel (14.42) set PBs.

The déjà vu continued into the discus. Nowak (47.27m) and Kaul (46.90m) posted lifetime bests, both showing excellent strength in their throws throughout the two days of competition. Fredrik Samuelsson logged his first new mark of the competition, improving his discus best to 45.19m and delighting his ‘Yellow Wall’ of Swedish fans.

Moloney, meanwhile, threw a solid 41.98m, little more than a metre shy of the PB he set earlier this year. Perhaps modest when viewed against the German strength and the leading throw of Lindon Victor (54.03m), but Moloney’s mark was important points in the bank as one of his weaker events, the pole vault, approached.

During the pole vault, so often the discipline that changes everything, Estonian and Swedish fans around the bend at the Mösle Stadium vied as to who could be most colourful, and make the most noise, as their heroes took flight. Marcus Nilsson’s run of strong performances was disrupted as the five-metre-vaulter could clear only 4.40m. Moloney’s best was 4.40m, 20 centimetres below his best of 4.60m. Martin Roe, who had been suffering from a sore throat over the weekend, had a rare dip and went out with a best height of 4.50m, significantly below the heights close to five metres he has been clearing in 2019.

Warner went out with a best of 4.60m, Tim Duckworth at 4.90m and Dominik Distelberger delighted his home crowd by going over five metres to equal his personal best.

In the combined events, everyone has their moment and Tim Ehrhardt’s came in the pole vault in his debut appearance in Götzis. With a personal best of 5.41m, the vault came down to him and Maicel Uibo. Uibo took one vault at 5.30m to equal his PB and then retired, handing the stage to Ehrhardt. The US athlete didn’t go any higher but made his own individual mark on Götzis.

Niklas Kaul and Janek Õiglane dominated the javelin, with Kaul throwing 71.49m and Õiglane only a few metres short of the mark he set when finishing fourth in the 2017 World Championships, his last full decathlon.

“I need to get used to competing in a decathlon again,” said Õiglane, “but I’m happy with my performance.”

Victor again showed his strength in the throws with a mark of 66.48m, and Pieter Braun set a personal best of 64.19m, setting himself up nicely for a top-five overall finish. Further down the field, Moloney improved his javelin best to 54.49m and then 56.19m.

And with no upsets in the final event, the 1500m, Warner finished the day as the 2019 Hypomeeting winner with a score of 8711, becoming just the third athlete in the history of the meeting to notch up five victories, equalling the tallies of Roman Sebrle and Carolina Kluft.

Damian Warner in the decathlon 1500m at the Hypomeeting in Gotzis

Victor finished second with 8473, the second-best mark of his career, and Uibo placed third with 8353. Seven men finished with scores over 8200 – the qualifying standard for the IAAF World Athletics Championships Doha 2019 – including Kaul, Braun, Kai Kazmirek and Tim Nowak.

Cedric Dubler was an agonising 15 points short, and after the 1500m he said: “I have mixed emotions right now, I tried my absolute best in the 1500 to pick up a few points that I left lying around in the other events but everything here was incredible. The conditions were beautiful, the crowds and the atmosphere was just uplifting, I’ve never experienced anything like it.”

World bronze medallist Kazmirek was pleased with his return to form. “Last year I had a big problem with my hamstring,” explained the German. “This was my first decathlon after a year and I’m really happy to finish it. A personal best in the shot was really nice. The first day was great, and the second was ok – hurdles was ok, discus was ok, and then my pole breaks – my head felt dizzy and my 1500m and javelin wasn’t great after that. But this first competition was really nice, and now I’m looking forward to Ratingen.”

The final word, however, went to Warner. “I love Götzis and I’m happy with my score so early in the season,” said the 2015 world silver medallist. “I haven’t competed in a year so I wasn’t sure how it would go. I am also amazed to have won here five times, but it feels strange to be compared to a legend like Roman Sebrle.” 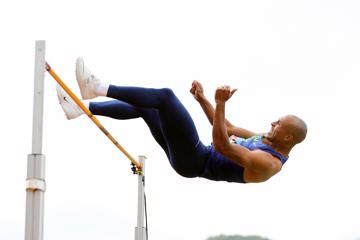