USA’s Camille Herron added eight kilometres to her own world best time to win the women’s race at the IAU 24 Hour World Championships in Albi, France, on 26-27 October.

The 2018 IAU International Athlete of the Year covered 270.116km during the race, which was held on a 1.5km loop surrounding the Terrain Honneur Stadium, breaking the world best of 262.193km she had set in December last year. She also led the US to their fifth consecutive victory in the women’s team race with a combined distance of 746.132km, winning by 25 kilometres.

Aleksandr Sorokin became Lithuania’s first ever medallist at the IAU 24 Hour World Championships, winning the men’s title in a national record of 278.972km and adding a kilometre to the championship record.

USA won the men’s team title with a combined time of 799.754km, another championship record, in what was the biggest IAU 24 Hour World Championships to date with 45 member federations taking part.

Herron led for the duration of the women’s race. She started to break away from the rest of the pack after the first three hours and had covered a marathon distance – 42.195km – in about 3:21.

Radka Churanova of the Czech Republic was her closest opponent during the early stages but still trailed Herron by more than four kilometres after four hours of running. Herron maintained a consistent pace, ranging between 4:43 and 4:46 per kilometre, for the next few hours.

Although her pace dropped slightly, Herron was ahead of most of the men’s field and found herself gaining on Sorokin, the overall leader, as she approached the half-way point of the competition. After 12 hours of running, Herron had covered 146.221km, putting her 12 kilometres ahead of the second-placed woman, which was now Nele Alder-Baerens of Germany.

While Sorokin – and the other eventual medallists in the men’s contest – pulled away from Herron in the second half, she continued to extend her advantage in the women’s race. After little more than 14 hours of running, she had covered the equivalent of four marathons (168.78km). After 20 hours, Herron had covered 228.226 and had a 10.5-kilometre lead over Alder-Baerens.

Herron added another 12.07km to her total distance in the final hour of the race and finished with a combined distance of 270.116km. Alder-Baerens maintained her position to finish second with 254.288m while Bereznowska broke away from Smith and Rex in the closing stages to take bronze with 247.724km.

It was Herron's third individual IAU world title, following the gold medals she won over 50km and 100km in 2015.

In the men’s race, France’s Erik Clavery led for the first eight hours, followed by Sorokin and Spain’s Ivan Penalva Lopez. Sorokin moved into the lead after nine hours and by the half-way point he had a 1.5km advantage over Clavery.

Clavery managed to hold on to second place for another seven hours, but he and Penalva Lopez were overtaken by Hungary’s Tamas Bodis before the 20-hour mark. With little more than an hour left, USA’s Olivier Leblond moved into a medal position, bumping Clavery and Penalva Lopez into fourth and fifth respectively.

Sorokin took the title with a distance of 278.972 with Bodis holding on for silver and Leblond taking bronze. 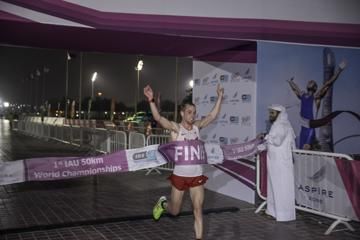 USA's Migliozzi and Herron take gold at the I... 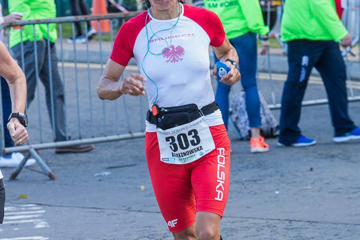