Competing as a guest, Thiam broke the Belgian indoor record with each of her first three jumps, opening with 6.63m, improving to 6.66m and then landing at 6.79m. She also jumped 6.59m in round four, but didn’t improve beyond round three.

“I’m really happy, especially because the first three tries are really important for the heptathlon,” said Thiam, the world silver medallist. “I didn’t prepare specifically for the indoor season, so I’m surprised with the result. The technical work carried out this winter is bearing fruit. It’s promising for the summer.”

The only women to jump farther than Thiam this year are the three medallists from the 2019 World Championships.

Just 59 points separated the three medallists in the women’s pentathlon. Annaelle Nyabeu Djapa had led since the opening event, kicking off her series with an 8.28 clocking in the 60m hurdles, a 1.78m high jump and a 13.38m heave in the shot. Cassandre Aguessy Thomas responded well in the final two events, long jumping 6.22m and clocking 2:22.03 in the 800m, but Nyabeu Djapa managed to hold on to the lead, ending with 4389. Aguessy Thomas finished second with 4359 while Esther Turpin was third, scoring 4330.

World champion Anzhelika Sidorova sailed over a world-leading 4.95m to win at the Pole Vault Festival in Moscow on Saturday (29), moving the 28-year-old to equal third on the world indoor all-time list.

Sidorova had set a PB of 4.92m just a few days prior at the Russian Indoor Championships, also in Moscow, where other highlights included a 2.00m leap from Mariya Lasitskene to win the high jump and a 7.09 clocking from Kristina Makarenko to win the 60m.

Pablo Torrijos produced the standout performance at the Spanish Indoor Championships in Ourense. The 2015 European indoor silver medallist added 14 centimetres to his own outright Spanish record, bounding out to 17.18m.

Olympic silver medallist Orlando Ortega bagged two gold medals, winning the 60m hurdles and 60m flat. He won his specialist event in 7.56, having clocked 7.54 in the semi-final. One day later, he sped to a PB of 6.65 to take the flat sprint crown.

European indoor champion Jorge Urena raised his season’s best to 6143 to win the men’s heptathlon title. At the end of day one, boosted by a 2.11m leap in the high jump, he was 60 points up on his own national record pace. A 4.65m clearance in the pole vault, some 45 centimetres shy of his PB, proved costly, but he ended his competition having done more than enough to win.

Manuel Bua won a high-quality men’s 400m final in 46.40. Bernat Erta finished just outside the medals, but was rewarded with a national U20 indoor record of 46.73.

Youth Olympic Games champion Grace Stark broke the world U20 indoor record twice in the 60m hurdles, clocking 7.93 in the prelims and then 7.91 in the final, where she finished just 0.02 adrift of Tonea Marshall.

Stark, a student at the University of Florida, eclipsed the 8.00 mark set by Poland's Klaudia Siciarz in 2017.

Twenty-year-old Abby Steiner clocked a world-leading 22.57 to win the women's 200m from Tamara Clark (22.69). Symone Mason ran 22.76 in the second section of the final to place third overall.

The men's 400m was of a similarly high standard. Bryce Deadmon won the faster section of the final in 45.51, just 0.11 ahead of Jamal Walton. Elija Goodwin placed third overall, having clocked 45.96 in the second section.

Tyra Gittens of Trinidad and Tobago, a student at Texas A&M University, dominated the pentathlon, tallying 4391 to win by 225 over Anna Hall from the University of Georgia. Gittens, 21, produced strong performances in the high jump (1.86m) and long jump (6.27m).

KC Lightfoot of Baylor University topped 5.77m to take the pole vault title on the first day of the Big-12 Conference Championships in Ames, Iowa, on Friday (28). The 20-year-old, who competed at last year's World Championships in Doha, topped a 5.83m lifetime best two weeks ago.

Warholm clocks 45.97 in Ulsteinvik, Mihajlovic improves to 21.84m in Belgrade

In his only race of the indoor season, the two-time world 400m hurdles champion clocked 45.97 to finish well clear of three-time world indoor champion Pawel Maslak, who clocked 46.47. Warholm's performance was equal-seventh on the 2020 world list and the fastest by a European.

World pole vault champion Sam Kendricks topped 5.80m to take victory in his event, ahead of 18-year-old European U20 champion Pal Haugen Lillefosse, who cleared an outright PB of 5.70m to move to third on the world U20 indoor all-time list.

World U20 record-holder Yaroslava Mahuchikh won her seventh indoor competition in as many outings this season, topping 1.96m on her second try.

Filip Mihaljevic capped his indoor campaign with a 21.84m victory in the shot put at the Serbian Open in Belgrade on Thursday (27).

His fifth-round effort was his third Croatian indoor record of 2020, sealing his third victory in four competitions this winter. The 25-year-old, who took surprise world indoor bronze in 2016, was the 2020 World Athletics Indoor Tour winner in his event. 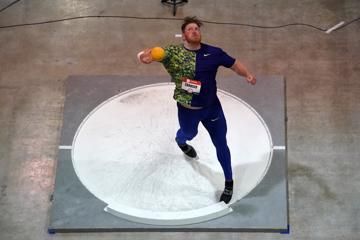 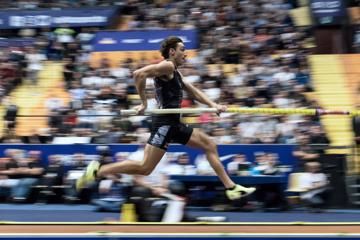 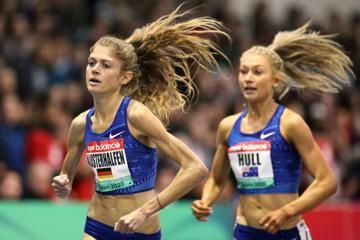