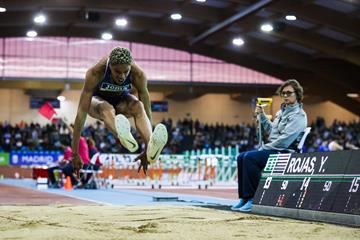 With her final attempt of the evening, Venezuela's Yulimar Rojas bounded out to a world indoor triple jump record of 15.43m* at the Meeting Villa de Madrid, the final World Athletics Indoor Tour meeting of the season, on Friday (21).

The two-time world champion opened with a foul but then registered a valid 14.65m in round two to immediately move into the lead. After another foul in round three, she sailed out to 15.29m in round four, breaking her own South American indoor record and moving to second on the world indoor all-time list.

She wasn't finished, though.

Following a third foul in round five, Rojas commanded the attention of the packed-out Polideportivo Gallur for her sixth and final attempt. She nailed every stage and landed at 15.43m, adding seven centimetres to the world indoor record that had stood since 2004.

It was also two centimetres farther than her outdoor PB and is the absolute second-best triple jump performance, indoors or outdoors.

“I’m over the moon; I can’t believe I’m the world record-holder,” said Rojas. “I want to get home and cry. I need to cry to release the adrenaline I have right now.

“When I managed 15.29m so easily in the fourth round, I thought the record was definitely in my legs.”

Fellow triple jumper Hugues Fabrice Zango had been hopeful of challenging the world indoor record in the men’s event, but the world bronze medallist struggled to find his rhythm.

The Burkinabe jumper opened with two fouls and then landed a valid 17.09m jump, giving him a slender lead over France’s Melvin Raffin. He improved to 17.22m in the next round and then went out to 17.31m with his final attempt.

Although he was disappointed with his effort on the night, it was enough to win the World Athletics Indoor Tour title in his event.

With all the track action having concluded, all that was left was the final round of the men’s long jump. Echevarria had led since his opening-round effort of 8.33m, a mark he almost matched in round two with 8.31m.

Miltiadis Tentoglou (8.07m), Thobias Montler (8.02m) and Yuki Hashioka (8.02m) all crept over eight metres in the successive rounds, but none of them could challenge Echevarria.

The Cuban took to the runway one last time and sailed out to a meeting record of 8.41m, just five centimetres shy of the indoor PB he set when winning the 2018 world indoor title.

Clemons and Mihaljevic produce their best when it matters

The women’s 60m hurdles and men’s shot put were among the closest contests on the World Athletics Indoor Tour heading into Madrid.

World champion Nia Ali led the tour standings in the women’s 60m hurdles following her win in Lievin earlier in the week. Another victory in Madrid would have maintained her position. But Christina Clemons was second in the standings and had the faster performance in the tour, meaning if she beat Ali in Madrid, she would be crowned the champion.

Little separated the two in the heats with Clemons winning her race in 7.90 and Ali speeding to a season’s best of 7.88 in the other. In the final, the US duo were level over the first two flights but then world indoor silver medallist Clemons started to pull away, eventually winning in a meeting record of 7.82.

It was possibly one of the most lucrative performances of her career as she landed a $20,000 bonus for winning the World Athletics Indoor Tour.

Ali crossed the line in 7.88 while Spain’s Teresa Errandonea set her second PB of the night to place third in 8.00.

In a dramatic final round, Filip Mihaljevic uncorked the performance of his life to win the men’s shot put.

Poland’s Konrad Bukowiecki initially led the competition with his opening effort of 20.71m, but Mihaljevic took the lead with a second-round mark of 21.38m. Bukowiecki responded in the next round with 21.73m, then Tomas Stanek improved to 21.54m, pushing Mihaljevic into third.

The positions remained the same for the next two rounds, but then Mihaljevic unleashed a winning put of 21.74m with his final attempt, breaking his own Croatian indoor record and the meeting record. Bukowiecki and Stanek ended their series with fouls, meaning Mihaljevic took the victory and the World Athletics Indoor Tour crown.

The meeting records were rewritten in both of the men’s short sprint events.

Just two nights after winning in Lievin in a season’s best of 6.44, USA’s Ronnie Baker matched that time to win again in Madrid.

The world indoor bronze medallist breezed through his heat in 6.50 and looked even better in the final. Despite a strong challenge from compatriot Demek Kemp, Baker kept his cool to win in a meeting record of 6.44, his seventh win of the indoor season, including heats. Kemp crossed the line in a PB of 6.48 while European indoor champion Jan Volko recorded a Slovak record of 6.55 in third.

Pozzi was similarly impressive over the barriers. Following a 7.55 run in the heats, the world indoor champion sped to a season’s best and meeting record of 7.48 in the final. Like Baker, it was his seventh successive win of the season.

Kuwait’s Yaqoub Mohamed Al Youha pushed the Briton all the way and was rewarded with a national record of 7.52 in second place.

Ethiopia’s Getnet Wale and Gudaf Tsegay won the longest races on the programme – and, with it, the World Athletics Indoor Tour honours.

Steeplechase specialist Wale was a late entrant for the men’s 3000m following his surprise 7:32.80 victory in Lievin earlier in the week. It meant that a win in Madrid would give him the overall series crown. But he was up against a field that included Selemon Barega and Bethwel Birgen, the top two in the standings who were also in a position to scoop the tour title.

Another 3000m win for Getnet Wale, this time in Madrid (Dan Vernon) © Copyright

Led through the first 1000m in 2:35.09 by the pacemaker, the field was strung out from the opening laps. Ethiopia’s Abrham Sime found himself at the front through 2000m, passed in 5:12.14, but then Wale took up the running soon after.

Tracked closely by Birgen and Barega, Wale dug deep over the final two laps. All three kicked hard on the closing circuit, but Wale managed to hold off his pursuers, crossing the line in a meeting record of 7:39.96, securing the World Athletics Indoor Tour title in the process.

The world bronze medallist had fellow Ethiopians Axumawit Embaye and Lemlem Hailu for company throughout and they tried to challenger her on the final lap, but Tsegay managed to keep them at bay and won in 4:04.66. Hailu overtook Embaye in the closing stages to finish second in 4:05.24, 0.19 ahead of the 2014 world indoor silver medallist.

The top six women all finished inside the previous meeting record of 4:08.31.

The 25-year-old Kenyan had won five races in a row before Madrid and led the World Athletics Indoor Tour standings. A swift opening half of 50.72 from the pacemaker had the potential to make the last two laps unpredictable, but Kipruto held on to his lead for the remainder of the race.

World indoor champion Adam Kszczot and Spanish duo Adrian Ben and Mariano Garcia tried closing on the Kenyan on the final lap, but Kipruto was not to be beaten, winning in a meeting record of 1:46.09.

Victories for Swiety-Ersetic and Filippidis

European indoor champion Lea Sprunger led through the first lap, but Swiety-Ersetic made a move along the back straight and overtook the tall Swiss sprinter, striding ahead to win in 51.93. Sprunger finished second in 52.26, just 0.10 ahead of Lisanne De Witte.

In the non-scoring men’s 400m, Spain’s Samuel Garcia delighted the home crowd by winning in 46.39, just 0.04 shy of his PB. Kuwait’s Youssef Karam was close behind in second place in 46.41 while Zambian teenager Kennedy Luchembe was third in 46.73, the second-fastest indoor time ever by an African U20 athlete.

Elsewhere, Konstantinos Filippidis won the men’s pole vault on countback with 5.60m. Although it was a scoring event, Sweden’s world record-holder Armand Duplantis had already done enough earlier in the tour to win the series title.