Thirty-eight years ago the first edition of the Jan Meda International Cross Country competition was held at the famous racing ground in Addis Ababa, Ethiopia. Since then, annually, many of the world’s top long distance runners from Ethiopia don their club team singlets, and meet in the capital of Addis Ababa to vie for national glory, spots on teams bound for the World Cross Country Championships, and the attention of international agents. On Sunday (31), the 2021 edition took place, markedly different from previous non-pandemic editions. Foreigners were nearly absent, spots for a world team were not on the line.

Jan Meda holds special significance, within and beyond athletics. As Michael Crawley notes in his new book on Ethiopian running, Out of Thin Air: Running Wisdom and Magic from Above the Clouds in Ethiopia, Jan Meda was where Emperor Menelik II displayed canons after Ethiopians beat the attempts of colonization from the Italians in the late 1800s. Emperor Haile Selassie first used the grounds for his coronation, and later frequented them for horse racing and polo games. Other sports, including athletics, came to take place on the grounds with Ethiopian legends like Abebe Bikila and Mamo Wolde using it as a training ground. But in recent years it has perhaps been most famous for hosting one of the most competitive domestic races of the year.

However, instead of taking place in historic Jan Meda, this year’s race was held in the Oromia region. Months back the Ethiopian government opted to shift Ethiopia’s largest vegetable market to Jan Meda, as it is the largest open air space in Addis Ababa, to prevent the transmission of Covid-19. Although the name didn’t change, this year’s edition, titled the 38th Jan Meda International Cross Country competition, did shift its setting to Sululta, a small city about one hour from Addis.

The large open field was filled with entrants and spectators for the day. A taped-off two-kilometre loop made it excellent for viewing the races, beginning in the early morning with a mixed-gender relay competition. Alternating legs of men and women took on the loop, culminating in a sprint finish with the women competitors.

Senbere Teferi, after taking her team's baton in fourth, made up ground over her loop to bring her club, Federal Mariyama Police, the win.

“I knew I had some time to make up, but I was confident I could bring us the win,” Teferi said. The half marathon star is slated to race at the Ras Al Khaimah Half Marathon on 19 February.

At the time of the relay, the winds were already blowing steadily. But when the senior races went off, constant gusts made the starting straight an early tailwind sprint, and the easterly part of the loop a competition not just with the other runners. Pushing forward into winds gusting at an estimated 30 kilometers per hour in muddy conditions required a high level of mental, as well as physical, fortitude.

As a result, both races were run tactically, with large packs sticking together until the final lap. In the women’s senior race, Gebaynesh Ayele, wearing the Defense Club kit (Mekalakya) looked poised to win early on, demanding control of the pace. Ayele has been a common fixture on the Ethiopian domestic racing scene, landing herself on the podium in Ethiopia’s latest big races – third at the Great Ethiopian Run and first at the Bishoftu 30km. But Ayele would only finish third in 34:52. 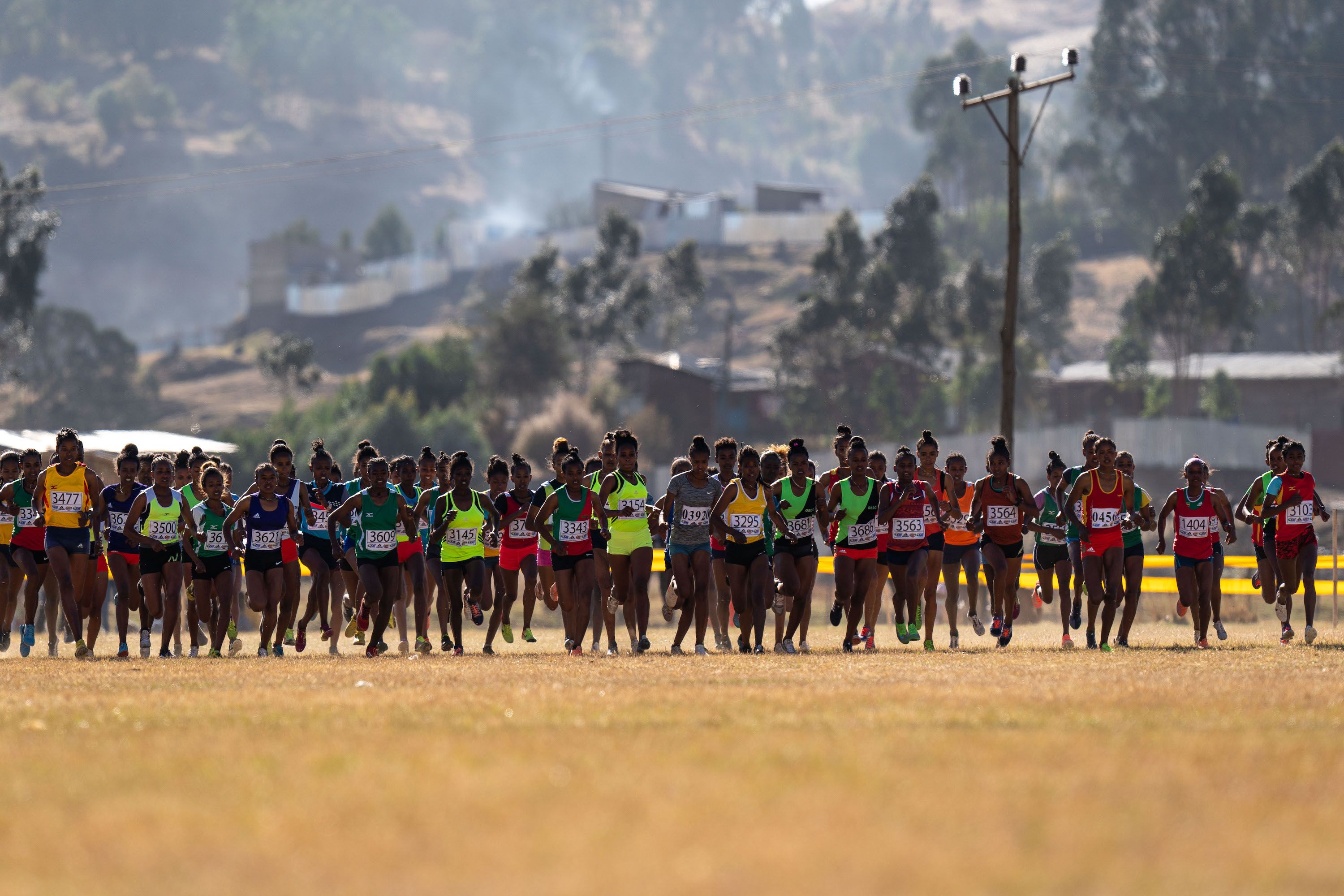 However, a duo from the Amhara Region club outkicked her on the final straight, bringing a 1-2 finish to their club. “The wind was a bit difficult,” champion Zewditu Aderaw said, after finishing the 10km course in 34:49. Her training partner, and runner-up finisher, Tigist Getnet, who finished in 34:51 agreed. “It also started off very fast, which made it extra difficult with the wind, but we were really happy to finish 1-2.” Both were excited to make the trip back to the Amhara region that afternoon with hardware to share with their club.

The men’s race also saw early flashes of Mekalakaya’s colors, red and green, donned by world 5000m champion Muktar Edris in the early stages. By the third lap, however, a smaller front pack had formed with the track champion falling behind. Spectators cheered loudly as the top finishers came into the last straightaway, with defending champion Nibrat Melak ultimately outkicking the lone foreign competitor, Kenya’s Daniel Simiu Ebenyo, for the win.

Melak, who was representing the Amhara Maramiya Police Club, was pleased not only with the win, but with how he was able to accelerate in the final metres.

“I had good finishing speed because I’m currently preparing for the Olympics,” Melak said. Though currently based in Addis Ababa, Melak, an only child, comes from Debre Markos, where he is coached by Ebrahim Dangen Ahimed.

Ebenyo, the winner of Madrid’s San Silvestre Vallecana this past New Year’s Eve, saluted Melak from behind out of respect for his strong finishing speed.

“I was the lone competitor invited by the Kenyan Federation,” said Ebenyo, who made the journey from Iten to compete. “So I’m really thankful to both the Kenyan and the Ethiopian Federation. It was a very competitive field but I’m happy I was the sole Kenyan to come away with a high finish in the Ethiopian field.” Oromia’s Teresa Tolosa took third in 30:21.

Although the podium presentations were not filled with the same level of pomp and glory that normally emanates from the historic field of Jan Meda, the event lived up to its expectations. With tough conditions, the grit integral to good cross-country viewing, with unexpected conclusions, was still on full display.