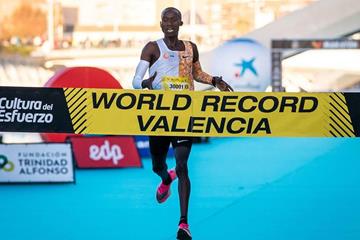 The Ugandan star clipped six seconds from the previous record of 26:44 set by Kenya's Leonard Patrick Komon in 2010 to complete a sensational 2019 hat-trick that included world titles in cross country and 10,000m on the track.

Pacesetter Roy Hoornweg covered the opening kilometre in 2:42 before Cheptegei moved to the front briefly demanding a quicker pace, a demand that was met - by the second kilometre the clock read 5:42 for a 2:40-kilometre split. Once Hoorweg dropped out, Stephen Kissa and Abdallah Mande took command with Cheptegei in tow, with the trio covering three kilometres in 7:57, well inside the word record schedule.

Following a 2:41 split for the fourth kilometre, Cheptegei overtook the pacemakers before the halfway point, reaching 5km in 13:23, one second shy of the world record for that distance.

Running on his own over the entire second half, a determined Cheptegei reached 6km in 16:02 and 7km in 18:42. Cheptegei forged on, reaching 8km in 21:37, when it became clear that the world record was within reach.

With 23:59 on the clock at the 9km point, Cheptegei needed to cover the final kilometre in 2:45, a close well within his capabilities.

“World cross champion in Denmark, 10,000m world champion in Doha and now the world record here in Valencia. What a year it has been," the 23-year-old said. "I can’t believe it! I knew that Valencia was going to be a really fast course, one of the fastest in the world. So to get to achieve what we came here for is something really special."

Further back, another Ugandan, Kevin Bett, was second in 28:19. Mohammad Reza Abootorabi of Sweden was third clocking 28:35.

Next up for Cheptegei? A pair of big appearances, first at the World Athletics Half Marathon Championships Gdynia 2020 on 29 March, a distance over which he has yet to race. Then, the 10,000m at the Olympic Games in Tokyo where he'll cross paths with defending champion Mo Farah who recently announced his intentions to return to the track in a bid to win a third successive Olympic title.

"After that I'll be training my body and my mind to keep on breaking records."