For most of the race, however, it looked as though someone else would make history for another reason. Uganda’s Joshua Cheptegei, the posterboy of the championships, was looking to bring home his country’s first senior men’s title.

Kamworor led a pack of about 30 athletes through the first of five two-kilometre laps in 5:12, with his teammate Vincent Kipsang Rono leading through 4km in 11:02. Kamworor, Cheptegei, Kenyan cross-country champion Leonard Barsoton and some 10 more runners were on his heels.

Going into the third lap, Cheptegei made his move and with a strong kick developed a solid lead over Kamworor and the rest of the pack. The next four kilometers had the crowd in ecstasy as Uganda’s second victory of the day looked to be looming after Jacob Kiplimo had secured gold in the men’s U20 race an hour earlier. Between kilometres four and six he produced a 5:45 lap and picked up even more speed when recording a 5:34 fourth lap, to lead through 8km in 22:21.

But with just one lap between Cheptegei and a historic gold for the host nation, his reckless speed combined with the hot and humid conditions began to show. The 12-second lead the Ugandan had held over Kamworor entering the final lap was reduced to about seven with just one kilometre to go. Meanwhile, Kamworor gained confidence from his rival’s suffering and swiftly closed the gap.

Under the moans of the crowd and the delighted cheers from the ‘Kenyan cheering squad’, as Kamworor described later, the reigning champion flew past Cheptegei to secure his second world cross-country title.

His compatriot Barsoton came through strongly in second (28:36) with Ethiopia’s Abadi Hadis in third (28:43).

“I was confident of retaining my title,” Kamworor said after the race.

“When the Ugandan broke away, I kept my cool and ran my race. I knew he would get tired. His pace was too high and it would have been amazing if he had maintained it to the end.”

With about 500 metres to go, Cheptegei’s legs almost fully gave way. Courageously and cheered on by the crowd, he pulled himself over the line in 30th, which proved vital in the team rankings.

He was the fourth scoring Ugandan behind Timothy Toroitich, Abdallah Kibet Mande and Stephen Kiprotich, which meant the host nation went home with a team bronze, just three points ahead of Eritrea. Ethiopia secured team gold by just one point over Kenya. 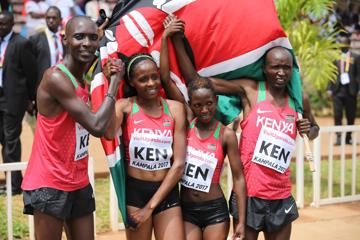 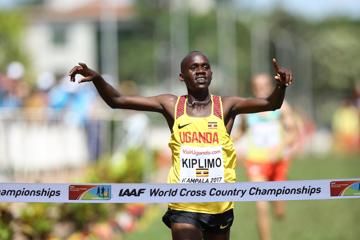 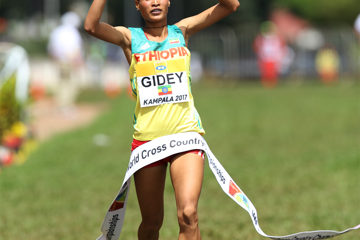 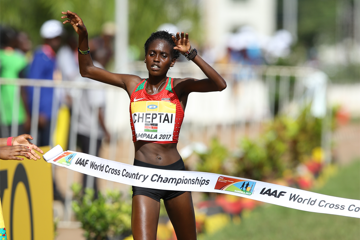