Kimutai, the winner of the Rotterdam Marathon in April, broke away from compatriot Solomon Kirwa Yego in the 39th kilometre en route to a 2:08:33 victory, more than a minute clear of Yego who clocked 2:09:36.  Wote made her move much sooner in the women’s contest, breaking from a five-woman pack after the 25th kilometre en route to a clear 2:27:02 win, 50 seconds ahead of runner-up Purity Jebichii Changwony, the defending champion.

It was clear early on that the gusting winds that would knock down barricades along several parts of the course would dampen most hopes for serious race record assaults. A modest opening 10-kilometre split of 30:44 in the men’s race confirmed that quickly, with a group of ten in contention. The pack was reduced by just one at 20-kilometres, with six still running for the victory when they crossed the 30-kilometre marker in 1:32:20.

Men's lead pack after 20km at the 2017 Ljubljana Marathon

Soon thereafter Kimutai and Yego surged onward, leaving Albert Korir and Philip Sanga Kimutai to battle for the third podium spot. The lead pair ran stride for stride at 35 kilometres but Kimutai, finally free of the headwind that he battled for most of the race, pulled away for good as the two returned to the edge of the Slovenian capital’s old town centre. Kimutai extended his lead dramatically over the final two kilometres, but managed to come up 14 seconds shy of Limenih Getachew's 2:08:19 race record set in 2015.

“The strong wind was a problem,” said the 25-year-old, who set his lifetime best of 2:05:47 in Amsterdam last year where he finished third. "After 32 kilometres the wind was okay, but until then it was quite hard."

While he faded over the waning three kilometres, Yego held his position firmly to finish second, reaching the finish 59 seconds ahead of Korir who clocked 2:10:35. Sanga Kimutai was next in 2:11:02 with Vincent Kipkorir Tonui rounding out a Kenyan sweep of the top five spots in 2:12:12.

The women started off on a faster clip, with a group of five --Wote, Changwony, Jane Jelagat Seurey, Shasho Insermu and Azalech Woldesselasse-- running together through the 25 kilometre mark in 1:26:01, still on target to challenge Caroline Kilel’s 2:25:24 race record set in 2009.

But Wote, the 2016 Vienna Marathon winner, broke from the pack in the next five-kilometre stretch and forged on alone --albeit with her male pacesetter Guta Hunde Fayissa who accompanied her to the final finishing straight-- to build a 22-second lead by 30 kilometres, and padding it to 30 seconds ten kilometres later to eventually cross the line unchallenged to collect her third career marathon win.

While pleased with the victory, Wote, 22, said her race record bid was hindered by both the wind and soreness in her left hamstring, a slight but lingering injury that impacted her pre-race build-up as well.

Changwony, the winner in Ljubljana last year, was forced to settle for second this time, clocking 2:27:52 to clip 1:40 from her lifetime best. 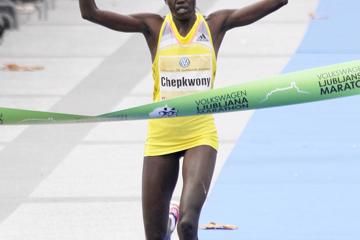 Chepkwony beats the breeze in Ljubljana...