Chepkwony beats the breeze in Ljubljana

Breaking from her final challenger in the 35th kilometre, Caroline Chepkwony cruised to a 2:27:27 victory at the 18th Volkswagen Ljubljana Marathon on Sunday (27).

It was a notable breakthrough for the 29-year-old Kenyan, who knocked three minutes and seven seconds from her previous career best, despite battling against a hefty wind over the final four kilometres.

“I’m really happy to have improved my personal record,” said Chepkwony, whose 2:30:34 previous best came in Berlin one year ago where she finished seventh. “On some parts of the course, especially in the middle of the race, there was a very strong wind against my chest. But I was preparing for this race for three months so I’m very happy with the results and the win.”

The race began briskly, with a tightly wound group of six reaching the 10km point in less than 35 minutes, within striking distance of Kenyan Caroline Kilel’s 2:25:24 event record set in 2009.

But the southerly winds put paid to any record ambitions near the end of the race’s first 21-kilometre circuit where Chepkwony and four others – fellow Kenyan Edinah Kwambai and Ethiopians Degefa Eshetu, Etalemahu Kidane and Asnakech Mengistu – reached the midway point in 1:13:30, already about a minute-and-a-half off record pace.

Ten kilometres later, only Chepkwony and Kidane remained in contention, having built a 69-second cushion over Kwambai and Eshetu. About four kilometres later Chepkwony forged on to reach the finish in Ljubljana’s central Congress Square alone.

“At the start I didn’t know if any of the other runners were better prepared than me,” Chepkwony said. “I just wanted to run my fastest performance. So after some kilometres running with a group I decided to go on and run by myself to the finish.”

Kwambai held on to finish second in 2:29:35, a 14-second improvement from her previous best from Hannover earlier this year. Emily Chepkemoi Samoei, who was some two minutes back after 31km, passed the fading Ethiopian trio in the waning stages to finish third and secure a Kenyan podium sweep. She clocked 2:30:01 with Kidane next across the line, clocking 2:31:33.

The men’s contest was comparatively slower than the women’s but much closer. Mulugeta Wami didn’t secure the title until the final 400 metres when he out-dashed compatriot Deribe Robi to the line, crossing in 2:10:26 to win by four seconds.

“When we began to run, we were planning to attack the record,” said the 31-year-old Wami, whose victory was his first over the distance since 2009. “So we decided that we would take turns with the lead. But after 21km we saw that the pace was too slow so in the end we could only think about the victory.”

Robi finished four second back, just one second in front of Kenyan Julius Chepkwony who in turn was one second ahead of compatriot Ishimael Bushendich. Ethiopian Girma Tefera Goshu (2:10:50) also broke 2:11 to finish fifth. 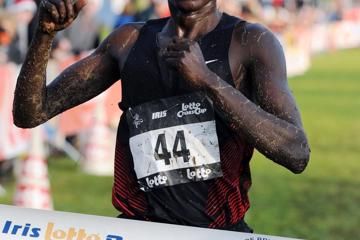 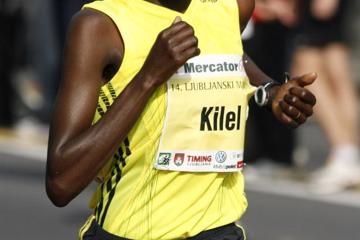