Eliud Kipchoge won a thrilling battle with his fellow Kenyan Wilson Kipsang over the final kilometres of the 2015 Virgin Money London Marathon but prevailed to win the IAAF Gold Label Road Race by five seconds in 2:04:42 on Sunday (26).

The 2003 world 5000m champion, who has made a successful switch to the roads in recent years, started to edge away from the two-time London winner Kipsang with two kilometres to go before kicking again over the final 800 metres.

He had built up a big enough lead to allow him to celebrate as he came down The Mall, pointing to the crowds lining the roads and clenching his fist in triumph before adding the London title to the marathons in Rotterdam and Chicago he won last year.

"It was a tough race," said Kipchoge. "My training paid off and it went to plan. The crowd were wonderful and lifted me for my sprint finish."

Both Kipchoge and Kipsang confirmed on British television that they would run at the IAAF World Championships, Beijing 2015 this summer if selected by the Kenyan federation.

World record-holder Dennis Kimetto was unable to stay with the leading pair shortly after 35km and started to drift back but finished third in 2:05:50 to complete an all-Kenyan men’s podium.

Kipchoge looked comfortable throughout a race that started with a 4:39 mile and stayed on course record schedule until the final stages.

Billed as the ‘Clash of the Champions’, it featured the greatest men’s field ever assembled, with five of the world’s all-time top 10 and eight men who have run faster than 2:05.

The men made the most of a downhill section of the course in the first few miles to go through 5km in 14:31 but the pace then settled, the 10 east Africans going through 10km in 29:14, cheered by amazing crowds as they passed the famous London landmark of the Cutty Sark in the suburb of Greenwich.

Biwott, runner-up in last year’s race, led the group through 15km in 44:04, and Geoffrey Mutai was the first victim of the quick pace, slipping back as they headed across Tower Bridge and past the 20km point.

The 2011 New York Marathon champion drifted off the back of the group before dropping out just after the leaders passed half way in 1:02:20.

Kipsang made his first move 30 kilometres into the race and there was nothing to choose between six men, who spread out across the road in a single line, matching each other stride for stride.

Kitwara then fell off the pace once they passed the 35km point, covered in 1:44:02, to reduce the leading group to five, who headed along The Highway in Wapping towards the finish.

A couple of slower miles, with thoughts in most of the runners’ minds turning to victory rather than a course record, put that statistic out of reach; an acceleration by Kipchoge then ended Regassa’s hopes, meaning four men were left to battle for three medals.

Kipsang and Kipchoge made their move as they dipped out of sight beneath an underpass, emerging with a 20-metre lead over Biwott and Kimetto that gradually grew along the Embankment.

Kipchoge made a move at the 40km drinks station but could only get a stride ahead before Kipsang was back alongside.

In 2013, Kipchoge had finished runner-up to Kipsang at the Berlin Marathon but this time he was the stronger man and sprinted home in front.

Ethiopia's Tigist Tufa, just the ninth fastest in the field prior to the race, ended Kenya's four-year domination of the women's race with surprise victory in 2:23:22.

Nine women were still together at 35km but after a surge by her compatriot Tirfi Tsegaye, which only Tufa followed, the latter then pulled clear over the final five kilometres for the biggest win – both financially and in terms of prestige – of her career.

At 40km, Tufa had an 11-second lead over her nearest rivals, Tsegaye and Kenya’s Mary Keitany, who had come through to get up on the shoulder of Tsegaye.

Tufa added to her advantage over the final two kilometres as she finished 18 seconds clear of Keitany, who was second in 2:23:40, while Tsegaye was third in 2:23:41.

“I knew Derartu had won here in the past, and I was planning to follow her and win as well,” said the 28-year-old. “This is a very, very big race and a great place to run.

“The last four years I have worked hard to be here and to be in the top three, so I am very grateful to have won today.

“I am very, very happy because I beat the world’s top athletes," added Tufa. "I was working to get a good time, but it was not about fast times today, and I saved myself to try very hard from the last 5k."

Last year’s winner, Edna Kiplagat, never featured at the head of the race and the two-time world champion eventually finished 11th in 2:27:16.

Much of the pre-race attention about the women’s race, at least in the British domestic media, had centred on 2005 world champion and IAAF ambassador Paula Radcliffe having her last competitive race.

The 41-year-old returned to the scene of her greatest triumph – her staggering world record of 2:15:25 set on the streets of the British capital in 2003 has remained unchallenged since then – and got some of the loudest cheers of the day as she crossed the line in 2:36:55.

"When I got into the last couple of miles, I thought, 'I really have to savour this and enjoy it as much as possible and thank as many people as possible'," said Radcliffe, who was presented with the inaugural John Disley Lifetime Achievement award after the race.

"There were so many people out there on the route. It did get really emotional on Birdcage Walk because as much as my body wanted it to finish, I didn't ever want it to end," she added. "It was so moving and I think I lost it for a little bit and managed to get it back together for the finish."

More than 37,500 finished the 26.2-mile journey from Blackheath to Westminster, making the 35th edition of the race the biggest in its history by almost 1000 runners. 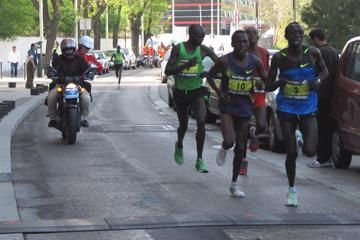 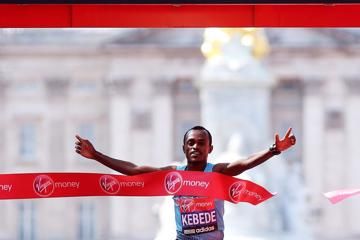 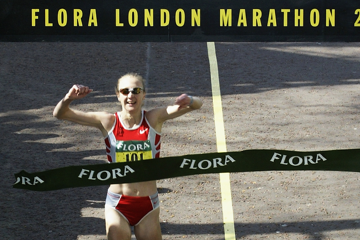