Kipruto and Kilel make it a Kenyan double at Frankfurt Marathon

The elite fields going into the race revealed unprecedented strength in depth for a Marathon in Germany with five men with personal bests below 2:05:30 and three women who had run sub 2:22 awaiting the starting gun. But with wind speeds of up to 50 kilometres per hour, any prospect of fast times soon disappeared.

A group of 14 men reached the half-way mark in 1:03:06, about 45 seconds slower than planned. Time and again they were strung out, running behind each other in an attempt to shelter from the wind. The fact that there was no pacemaker still in the race made it even more difficult. At least one was supposed to run to 30km.

“I was surprised that there was no pacemaker left after half way, but we made our own pace,” said Kipruto, who led a group of six runners at 30km (1:29:21).

There were still hopes for a finishing time in the region of 2:05 as the following seven-kilometre stretch was intended to benefit from tailwind. “But the wind swirled and there was no wind from the back,” said Christoph Kopp, the elite race coordinator.

Feyisa Lilesa looked fine in the first half, but then he fell behind due to a back problem and finally dropped out at 37km. His fellow Ethiopian Dino Sefir, the fastest in the field with a 2:04:50 PB, had lost contact with the first group before half way. But at least he made it to the end, eventually finishing seventh in 2:09:22.

Kipruto then pushed the pace between 32km and 34km. He left all but one rival behind; Kiptoo. The 37-year-old was running his first ever Marathon and was surprisingly able to stick with Kipruto until the end.

Shortly before they entered the Festival Hall, Kipruto made a decisive break and crossed the line in 2:06:15, just one second ahead of Kiptoo

Kenyans took the first five places and continued their impressive Frankfurt winning streak, which began back in 2002. Elijah Kemboi was third in 2:07:34, 12 seconds ahead of Chesari.

“I have spoken to a number of athletes and coaches and we think that the wind probably cost us around one-and-a-half minutes,” said Kopp. “Additionally the pace-making in the men’s race was terrible today. It was different with the women. They were better protected from the wind by their pacemakers.”

But Burka’s hopes of making a major impact in her first Marathon soon began to fade. She started to lose ground before 25km and eventually finished 12th in 2:30:40.

The other five were still together at 35km before Kilel made a break. She opened up nine seconds on Chepchirchir at 40km and extended her lead to nearly half a minute at the end, crossing the line in 2:22:34.

“I wanted to run 2:21, but with the wind and rain it wasn´t possible,” said Kilel. “But I am very happy because I managed to improve my personal best by two seconds. It was my second race in Frankfurt and my second personal best here. I want to come back in 2014.”

Chepchirchir held off a late charge from Dibaba to take second place by one second in 2:23:00. Germany's Anna Hahner was the top European finisher in eighth, clocking 2:27:55 to finish ahead of twin sister Lisa, who ran 2:30:17 in 11th place. 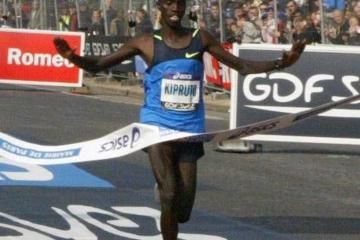 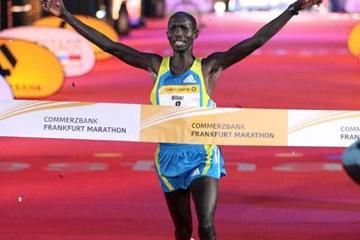 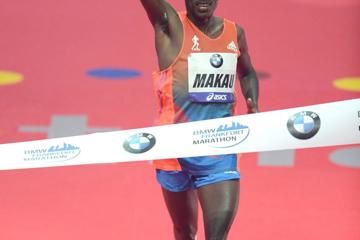