Alex Korio and Irene Cheptai made it a Kenyan double at the TCS World 10K Bengaluru 2017 race, winning at the 10th edition of this IAAF Bronze Label Road Race in 28:12 and 31:51 respectively, on Sunday (20).

Cheptai caught the eye in particular with an impressive performance that will confirm her rising status in the world of distance running and reinforce the belief that she can be among the medallists over the same distance on the track at the IAAF World Championships London 2017 this coming August.

She continued her unbeaten year, which includes a win at the World Cross Country Championships in March, with the second fastest time ever seen in the Bengaluru women’s race.

A conservative first half saw nine women pass three kilometres in 9:51 and five runners – Cheptai and her Kenyan compatriots Gladys Chesir, Helah Kiprop and Magdalyne Masai as well as Ethiopia’s Worknesh Degefa – were still together as the halfway point was reached in 16:19, at this stage well outside course-record pace.

However, Cheptai was looking comfortable and always to the fore during the first five kilometres and soon took matters into her own hands.

She gradually went through the gears in the seventh and eighth kilometres as her rivals one-by-one slipped away as they struggled to stay with the race favourite.

Despite being on her own at the front, her tempo didn’t drop over the final two kilometres and she crossed the line in the Sree Kanteerava Stadium just three seconds outside the course record of 31:48, set by another Kenyan runner Lucy Kabuu in 2014, after running the second half of the course in 15:32.

“I wasn’t confident at the start,” said Cheptai, partially explaining why she had not pushed the pace harder during the opening kilometres. “But from eight kilometres I grew in confidence and knew that I was going to win, and I was trying for the course record from seven kilometres.”

Degefa, the last of Cheptai’s opponents to succumb, hung on to take second place in 32:00 while the 2012 women’s winner Kiprop closed the gap on Degefa in the closing stages of the race but was third on this occasion in 32:02.

Korio, another former champion of the TCS World 10K, regained the title he won in 2013 with a strong second half of the race which also saw the winner run a negative split.

New Zealand’s Zane Robertson pushed the pace along with designated pacemaker Stephen Kissa, from Uganda, during the early part of the race as a nine-man pack went through three kilometres in 8:30 and then the midway point in 14:09.

However, a sharp increase in pace from the halfway point, initially instigated by Kenya’s Edwin Kiptoo and then Korio, saw the leading pack quickly disintegrate.

Korio then threw down the gauntlet midway through the seventh kilometre and no one could stay with him.

Even though pain seemed to be etched across his face for the final third of the race, Korio didn’t falter and the gap between himself and his nearest challengers – Kiptoo and Kissa having a duel for the other places on the podium – kept on gently growing.

Korio won in 28:12 with Kiptoo winning the battle for second in 28:26 with Kissa – who later said he’d decided to finish the race around the halfway point – taking third on his debut over the distance in 28:28.

“My experience after winning the race in 2013 certainly helped me today. I knew the course and I knew where would be a good place to push,” reflected Korio.

“I realised I could win the race at around six kilometres. I was watching Zane until the 6km mark and when Zane dropped, I knew I could push it even more,” he added.

Robertson, highly favoured after his outstanding 2016 which saw him lead the world over 10km on the roads with his 27:28, struggled during the second half of the race and finished down in seventh in 28:49.

Kenya’s world record holder Leonard Komon and Ethiopia’s defending champion Mosinet Geremew were off the back of the leading group by the fifth kilometre and eventually finished eighth and 10th in 28:55 and 29:31 respectively.

An estimated 24,000 runners took to the roads of Bengaluru on Sunday for the five different races in Asia’s leading run over distance. Korio and Cheptai each took home a winner’s cheque for US$ 26,000. 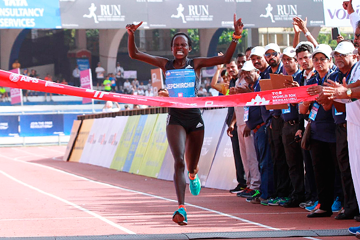 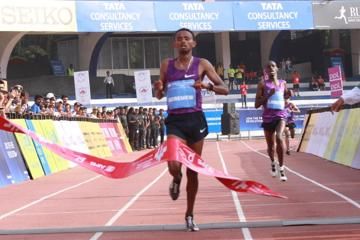