The fast-acting organisers of the EDP Lisbon Marathon and Vodafone Half Marathon delayed the start times of both races by an hour and moved the location of the start line for the half marathon to avoid the strong winds of Hurricane Leslie on Sunday (14).

Forecasts had predicted winds of 180kmph, making it impossible to use the bridge over the Tagus River for the starting point of the half marathon, an IAAF Gold Label road race. Instead, the race got underway on the IC2 motorway before re-joining the original designated course.

Ultimately, though, event records fell in three of the four races, meaning the extra effort organisers made in ensuring the events went ahead were all worthwhile.

Last-minute entrant Mustapha El Aziz of Morocco surprised the field in the men’s half marathon by taking three seconds off the race record to win in 1:00:16. The 32-year-old, who has a lifetime best of 59:29, comfortably defeated Ethiopia’s Abdiwak Tura Seifu and Eritrea’s Ammanuel Mesel, who clocked 1:00:41 and 1:00:45 respectively.

“I feel very happy to achieve this win with a good performance,” said the 2014 African 10,000m silver medallist. “When my manager told me I could race this event, I started focusing my training around this achievement. I’m really pleased with the organisation and this result is a good way of thanking them.”

The race record also fell in the women’s event as Ethiopia’s Yebrgual Melese surprised herself by winning in a lifetime best of 1:07:18, taking 35 seconds off the previous course record set in 2011 by Mary Keitany. European 10,000m champion Lonah Chemtai Salpeter finished second with an Israeli record of 1:07:55, defeating Kenya’s Betty Lembus by almost two minutes.

While the weather caused headaches for the organisers, the marathon runners found the tail wind to their liking and actually benefitted from the conditions in the IAAF Silver Label event.

After breaking away from the rest of the lead pack in the final kilometre, Ethiopia’s Limenih Getachew won the men’s race in 2:07:34, taking 47 seconds off the course record and Portuguese all-comers’ record set by Samuel Ndungu Wanjiku in 2014.

“I started to believe I could win just after the half-way point,” said the 28-year-old, who set his lifetime best of 2:06:49 when finishing second at the 2014 Paris Marathon. “I ran a faster second half because I wanted to set a personal best. I’m really happy with this result and I intend to improve this more and more.”

Wanjiku finished second in 2:07:51, also inside his own previous course record, while fellow Kenyan Justus Kimutai finished third in a PB of 2:07:58.

In the women’s race, Ethiopia’s Kuftu Dadiso smashed her personal best by almost seven minutes to win in 2:24:56.

Kenya’s Monica Jepkoech finished a distant second in 2:27:35 while Ethiopia’s Tigist Memuye completed the podium in 2:28:35.

BACK
Pages related to this articleAthletes
Mustapha EL AZIZ 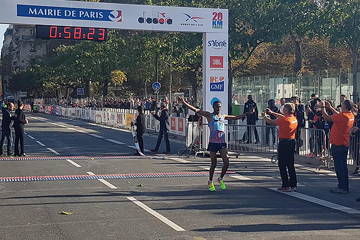