Lobuwan and Melchor win at the Santiago de Chile Marathon

Luka Rotich Lobuwan notched up the first marathon win of his career when he won the ninth edition of the Santiago de Chile Marathon, an IAAF Bronze Label Road Race, in 2:11:53 on Sunday (12).

The pace was very fast at the outset, 30:32 at 10km, and the 26-year-old Kenyan was in the initial break from the peloton at 16km, along South Africa’s Desmond Mokgobu and Ethiopian Haile Haja.

However, he paid the price of his ambitious pace over the first 25km, and just missed the course record by nine seconds.

The Kenyan runner has a personal best of 2:08:48 set in Seoul last year but on a warm autumn morning, and without any rivals for the much of the race, he was unlikely to challenge that time.

Haja finished a distant second in 2:15:05 with Mokgobu third, another 12 seconds further back. The first South American home was Colombia’s Diego Colorado, fourth with 2:17:09.

South American record-holder Ines Melchor from Peru made a successful return to the Chilean capital after finishing second in 2013 when she won the women’s race in 2:28:18, achieving what Lobuwan just failed to do and setting a course record.

For Melchor it was the second-best time of her life and only bettered by her South American record of 2:26:48 from the 2014 Berlin Marathon.

She was always in the leading pack along one of the pre-race favorites, Ethiopia’s Goitetom Haftu, while with them initially was a less well-known Ethiopian, Alene Sewarge.

Melchor posted a negative split, covering the second half in 1:13:20.

“I started to prepare for this marathon in January. I am at 80 per cent of my potential”, said the 28-year-old Melchor. “I am aiming to be at top of my form by the Pan American Games in Toronto, which will take place in July.

“This race was a very good one. The presence of good African runners pushed me to run better and to obtain this excellent performance. This is not an easy course. We have some elevation and the race climbs a few hard hills in the initial part,” added the Peruvian winner.

An estimated 28,000 runners took place in all the day’s races.

BACK
Pages related to this articleAthletes
Inés Melchor 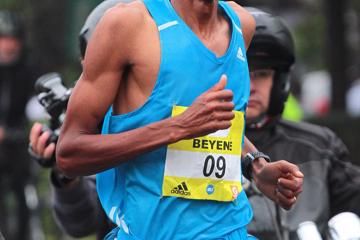