The man is fallible after all. Eliud Kipchoge’s reign of invincibility came to a crushing end with an eighth-place finish at the Virgin Money London Marathon, a World Athletics Platinum Label race, as Ethiopia’s Shura Kitata won a dramatic, last-gasp sprint to take the honours in the men’s race.

Kipchoge, the Olympic champion and world record-holder and unbeaten in 10 previous marathons, had been widely expected to claim an unprecedented fifth London title in his first race since making history by breaking the two-hour barrier in Vienna.

His principal challenger, Ethiopia’s Kenenisa Bekeke, had been forced to withdraw with a calf injury just two days before the race, while Kipchoge had cut a confident figure in the build-up as he discussed how well his preparations had gone.

Moments before he went to the start-line, fellow Kenyan Brigid Kosgei had raced to a runaway victory to retain her London crown, and few predicted anything but a Kipchoge triumph to complete a Kenyan double.

But this time, the race did not follow the usual script. Looking comfortable among a lead group of nine runners for much of the race, Kipchoge appeared to be biding his time before launching a characteristic surge of pace to break up the field.

The leading group in the men's race at the London Marathon

On this occasion, though, the attack failed to materialise. Instead, the tables were turned on the mighty Kenyan as his rivals launched a breakaway with three miles of the race remaining.

With Kipchoge unable to respond, a lead group of five soon turned into a three-way battle between Kitata, fellow Ethiopian Sisay Lemma and the towering Kenyan, Vincent Kipchumba. Kipchoge, meanwhile, was disappearing into the distance.

In one of the most exciting finishes in London Marathon memory, Kipchumba was the first to strike for home, only to be overtaken on the line by the diminutive Kitata. Just a single second separated the two men as Kitata clocked a winning time of 2:05:41.

“I prepared very well for this race,” Kitata, 24, said afterwards. "Kenenisa Bekele helped me. I am very happy to win the race.”

“I am really disappointed,” Kipchoge said afterwards. “I don't know what happened.

“The last 15km, I felt my right ear was blocked and I had cramp in my hip and leg.

“It just happened in the race. I started well. It's really cold but I don't blame the conditions.”

Eliud Kipchoge in action at the London Marathon

It was a remarkable outcome to an extraordinary race, which was staged for the first time over 19 laps of a closed-loop course around St James’s Park in central London after the original race scheduled for April had to be postponed due to the Covid-19 pandemic.

The course was also off limits to spectators to maintain a ‘biosecure’ bubble for the athletes and support staff. It was just a shame that no one was there to witness in person one of the most dramatic men’s races in the event’s 40-year history.

By contrast, the women’s race followed a more predictable path.

Kosgei, the overwhelming pre-race favourite after obliterating Paula Radcliffe’s 16-year-old world record when she won in Chicago last October in a stunning 2:14:04, delivered another imperious performance to retain her London crown.

Her time of 2:18:58 may have been 38 seconds slower than her victory a year ago, but her winning margin of more than three minutes spoke volumes for her dominance. At the age of just 26, she is already taking the marathon into uncharted territory.

“I just tried my best,” she said afterwards. “The weather affected us today. There was some wind and rain all the way, which made our muscles colder. No one could warm up so it was difficult to even finish.”

Earlier in the race, Kosgei’s main challenge came from fellow Kenyan Ruth Chepngetich, the world champion and London debutant, as the pair set a hot pace to break away just before the 10-mile mark.

Brigid Kosgei on her way to winning the London Marathon

The halfway split of 1:08:15 put the duo on track to lower Mary Keitany’s women’s only world record of 2:17:01, though the soggy conditions and tight corners on the looped course were never going to be conducive to record-breaking times.

Chepngetich made a brave attempt to surge away from Kosgei after the midway point, though the attack was swiftly countered and the pair settled into a more sedate pace for several miles, ending all thoughts of breaking records.

It was after the 19-mile mark that Kosgei made the decisive attack and this time Chepngetich had no answer, dropping back quickly and looking suddenly fatigued as she evidently paid the price for going with the early pace.

As Kosgei’s race turned in a one-woman exhibition over the closing miles, the real contest was taking place further back in the field as veteran Sara Hall of the US overhauled Ethiopia’s Ashete Bekere to move into third place before training her sights on the tiring Chepngetich.

In an exciting sprint finish that presaged the men’s race a couple of hours later, Hall, 37, found the energy to burst past the Kenyan with just 80 metres remaining, crossing the line in second place in a lifetime best of 2:22:01 for her first ever top-three finish in a major city marathon. Chepngetich finished four seconds behind her.

It was also the first time an able-bodied US athlete had made it on to the London Marathon podium since Deena Kastor’s victory in 2006 – an achievement that will help atone for Hall’s disappointment in failing to gain selection for the Tokyo Olympics at last year’s US Olympic trials.

BACK
Pages related to this articleAthletes
Shura KITATA 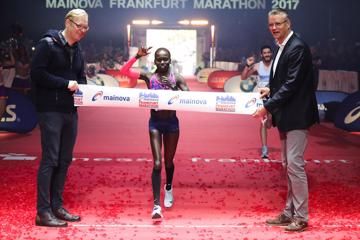 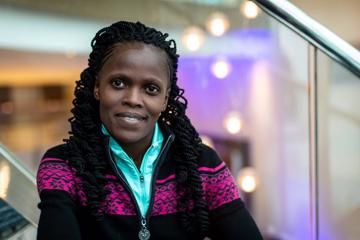 After record-shattering run, Olympic glory is...