Noah Lyles produced a thrilling come-from-behind 100m victory over Christian Coleman in one of the key showdowns at the Shanghai Diamond League meeting on Saturday (18).

Astonishingly, Lyles wasn’t even in the race until nearly 70 metres in, at which point he produced a phenomenal change of speed, seemingly switching gears from third to sixth. At that point it was clear that Coleman and his narrow lead were in trouble. Lyles continued to accelerate, passing one runner after another before finally running down Coleman at the line, even as he looked towards him as he began his lean.

“This was a message to myself,” said Lyles, who chipped 0.02 from his previous personal best set last year. “The 100 has never been my dominant thing so I wanted to make sure this year that everybody knew I was a 100 and 200 runner, and not just a 200 runner kind of running the 100.”

He made that crystal clear. So, what will it take to improve the first 60 metres of his race?

“If I knew what it would take, I’d be doing it right now,” he said, laughing. “It’s going to take more repetition, more learning. This is my third year being pro and really my second just starting to run the 100 consistently, so I think the more races I have, and also just growing up - I’m 21 - and getting into those later years in my life and gaining more muscle. And really just fine-tuning those things, getting out of the blocks, that’s probably what it’s going to take.”

Further back, Akani Simbine was third in 9.95 and Reece Prescod fourth, in 9.97.

Aleia Hobbs, the 2018 US champion, made her IAAF Diamond League debut a notable one, taking a convincing 100m victory in 11.03, 0.04 clear of Nigerian Blessing Okagbare. And she did it with a heavily taped wrist she broke two weeks ago while playing laser tag with some children.

“I knew I had to have a good start, and I got out well but everything else was kind of blurred,” Hobbs said. “Then I felt the push towards the end but I tried to stay relaxed and that’s what I did.”

In the women's 400m, IAAF Diamond League champion Salwa Eid Naser held off Sydney McLaughlin in another eagerly awaited face-off. After contrasting starts - the Bahraini got out quickly while McLaughlin held back - they were virtually even midway through the final turn. As they entered the straight, Naser began to gradually pull away before stopping the clock in 50.65 to the US teenager's 50.78.

Jumps wins for Stefanidi and Gayle

Katerina Stefanidi took maximum points in the pole vault, beating three others on countback at 4.72m. But for the locals, the big story was China’s Li Ling, whose second attempt success at that height added two centimetres to her own Asian record which had stood since 2016. Nikoleta Kiriakopoulou tied her for second while Sandi Morris finished fourth.

Tajay Gayle of Jamaica took the men’s long jump with a fifth-round 8.24m leap, his only jump of the night beyond the eight-metre line. Wang Jianan of China was second at 8.16m, two centimetres ahead of African champion Ruswahl Samaai.

Meet record holder Luvo Manyonga was a non-starter, forced to the sidelines by a stomach bug.

Wang Yu, winner of the high jump at the IAAF Diamond League meeting in Shanghai

His bold prediction came true, the 27-year-old winning on countback at 2.28m.

BACK
Pages related to this articleAthletes
Aleia HOBBS 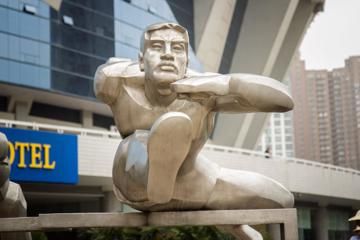 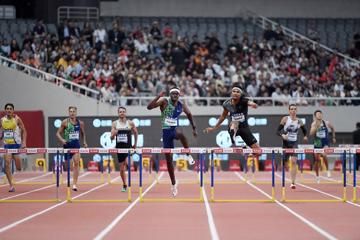