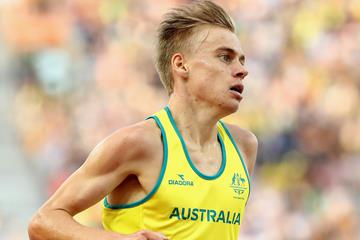 McSweyn and Hull clinch Olympic spots at 5000m in Melbourne

Melbourne loves its distance running and Jessica Hull and Stewart McSweyn produced two contrasting performances at the Melbourne Track Classic on Thursday (6) which had one thing in common – they delighted the distance aficionados.

Hull's run was more of the traditional style, sitting in on a solid pace set by Japan’s Hitomi Niiya before kicking decisively with 550 metres to run.

McSweyn, who made the 5000m final at the World Championships in Doha last year and has ambitions to do even better in Tokyo this year, rehearsed the manner of running which he will need to produce at the Games. After a first 1000 metres run at little more than the pace of a club race and a muddling 8:35.69 split at 3000m, McSweyn accelerated away. A succession of 60-61-second laps took him to the line in 13:38.77, some 10 seconds clear of second place.

Under Australia’s selection criteria, both will be automatic nominations to the Australian Olympic Committtee for selection in the 5000m. They have the automatic standard – two each, in fact – and they are the national champions. The Track Classic races came with Australian championship status.

Other highlights of the annual meeting, which also saw a tribute to Australia’s (and the athletics world’s) great facilitator Maurie Plant, were a 64.22m throw in the discus by Matt Denny and a break-through performance in the 100m hurdles by Liz Clay with her first sub-13-second run.

About the toughest task facing Hull between now and the Games might be deciding which event to run. She has three qualifiers at 1500m, the most recent an Oceania indoor record of 4:04.14 in Boston on 25 January. Now, her only two serious attempts at 5000m – 15:00.38 in Berlin last September and her 15:06.12 here – have also been under the automatic Olympic standard.

Hull said that her Australian title had not made things any easier, saying the deciding factor would be her next few months training. “Luckily, the two events complement each other,” she said.

What she and coach, Pete Julian, ultimately decide, Hull is certain she can run a faster, and better, 5000m.

“There’s a lot more there,” she said. “Maybe not at the finish, but in the earlier part of the race.”

That looked to be the case. Niiya, who had won the 2018 Zatopek 10,000 on the Lakeside Stadium track, led for most of the race, cranking out a succession of laps in the 73-74 second range. For half the distance, Hull, Genevieve Gregson and Linden Hall clung to the heels of the Japanese runner. Hall dropped back a few strides on several occasions and was dropped off for good by the time the leaders went through 3000m in 9:10.38.

When Niiya could not pick up the pace much beyond that, it seemed inevitable one of the Australians would win. Which one it would be was answered in emphatic manner when Hull shot to the lead with 550 metres to run and neither Niiya nor Gregson could respond.

From a walk to a rush for McSweyn

There had been talk before the meeting that Craig Mottram’s national record of 12:55.76 might come under attack in the men's race. Instead, the first 1000m went by in just over three minutes and the pace had not quickened that much by the time 3000m was reached.

Then McSweyn took off, a 60-second lap followed by a 61 and another 60. Only Olympic 5000m representative Sam McEntee tried to hold on to him but he, too, had to let go with a couple of laps left.

Running 2:31 and change for each of the last two 1000m splits, McSweyn raced to the line to complete an Australian track distance double in 13:37.88. He had won the Zatopek 10,000 in national record time just before Christmas. Now he is an automatic Olympic nomination at both distances.

The gallant McEntee looked in danger of being swamped on the final lap. He was passed by Matthew Ramsden, second in 13:48.67, but re-gathered himself to hold off Rorey Hunter for third place in 13:49.28.

Matt Denny made a significant senior break-through in finishing sixth at the World Championships and here he threw beyond 64 metres in his first serious competition of the Olympic year. His 64.22m put him well clear of any rival.

“I’m happy with that,” he said. “I had a 63 in a low-key club competition and they’ve both come at the end of a heavy four-week training block.

“I’ve got big ambitions for Tokyo, but I think they’re achievable. It’s about putting everything together the next five months,” Denny said.

“I haven’t got the auto qualifier (66m), but I’m seventh in the rankings, so I think I’m in a good place to get there.”

Clay also opened up big possibilities in the 100m hurdles. With Sally Pearson retired and Michelle Jenneke not competing, Clay showed there is depth to Australian women’s sprint hurdling with a win in 12.94, putting her fourth on the Australian all-time list behind Pearson, Jenneke and 1960-70s great Pam Ryan.