Rudisha, Boyd and Denny victorious at challenge opener in Melbourne

Rudisha will be delighted if Rio 2016 emulates London 2012 where his world record run to the gold medal dragged the rest of the field to the fastest in-depth 800m ever run and left not only his rivals but also onlookers – including Steve Ovett and Sebastian Coe – breathless.

Like any man, Rudisha can only take one step at a time and he was pleased with his positive start in Melbourne. In his first outing for 2016, he clocked 1:44.78.

Almost as delighted was 20-year-old Australian Luke Matthews who chased Rudisha all the way home to smash his personal best by more than a second. Matthews’ 1:45.16 was his first time under the Olympic qualifying standard.

New Zealand’s Tom Walsh, another regular in Melbourne both for training and competition, produced the best result on the field, taking the shot put with a distance of 20.87m.

Walsh pushed it fine this time. On Friday, he won the New Zealand title with a distance of 21.11m, before boarding a plane to Melbourne, arriving at lunch-time on the day of the meeting.

Matthew Denny got the IAAF Hammer Throw Challenge under way, taking the event with a distance of 68.63m.

Rudisha the middle-distance stand-out, but Gregson and Hills also impress

Rudisha and Matthews were the stand-outs of a meeting traditionally strong on middle distance, but there were also impressive performances from Ryan Gregson in winning the 1500m and Madeline Hills (nee Heiner) in the women’s steeplechase.

Gregson pushed strongly at the bell in an effort to better the Olympic qualifying standard (3:36.20). His best from the bell to the 200m mark opened up a substantial gap on New Zealand’s Eric Speakman, Collis Birmingham and Kenya’s Commonwealth champion James Magut. But Gregson paid a price for his aggression, slowing a little on the final straight into the wind to win in 3:38.06.

The chasing pack did not recover too much ground, however, Magut coming through again to take second in 3:40.03 just ahead of Birmingham and Speakman.

Hills, Genevieve Lacaze and Victoria Mitchell have all represented Australia internationally in recent times and they took on New Zealand’s World Championships representative Rosa Flanagan in a strong steeplechase field.

After a slow opening 1000 metres, Lacaze pushed the pace in the middle stages of the race. Once Heiner made her move over the last two laps, however, there was only ever going to be one winner. She crossed the line in 9:34.44, with Lacaze second in 9:43.93 and Mitchell third in 9:54.54.

Alana Boyd may or may not have lost her Oceanian record earlier in the day to New Zealand’s Eliza McCartney – who vaulted 4.80m to win her national title – but she showed continued good form to win the pole vault with 4.71m and had one close attempt at 4.81m

McCartney and Boyd have already met several times in competition in Australia and New Zealand this year. Boyd set an Oceanian mark of 4.77m in Queensland last month. McCartney cleared 4.80m to win her national title, but there was a query on whether there were three bona fide competitors.

In any case, Boyd is happy to have started Olympic year in such good form. “I’m happy with where I’m at,” she said.

While Boyd missed out on an Oceanian record, a continental best was broken earlier in the evening when Dane Bird-Smith continued his run of good form by winning the 5000m race in 18:38.97.

World Championships finalist Eleanor Patterson had her best competition of the season, clearing 1.93m to win the high jump before bowing out at what would have been a personal best of 1.97m.

Walsh had only three valid throws in the shot put, but his best of 20.87m put him well clear of Damien Birkinhead’s 20.16m. Unfortunately, Birkinhead appeared to suffer a lower leg injury on his fifth throw and had to withdraw from the competition.

With 2013 world silver medallist Kim Mickle still out of competition this season, Kathryn Mitchell was a comfortable winner of the javelin with a best distance of 64.37m.

But it was another Mitchell, one-lap runner Morgan Mitchell, who produced one the night’s most warmly applauded performances, running down Jamaica’s World Championships fourth-place finisher Christine Day to win the women’s 400m in 52.16.

Day went out hard and had made up the stagger on Morgan before the half-way point. But the young Australian charged home along the straight to take the win from Day, Anneliese Rubie and 400m hurdles specialist Kaliese Spencer.

BACK
Pages related to this articleAthletes
Alana Boyd 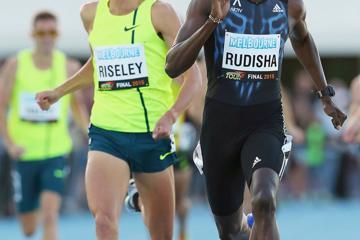