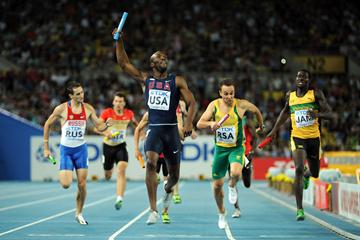 Daegu, Korea - The sun rises in the east and sets in the west and still the USA are top dogs in the men’s 4x400m relay – yet they were made to work harder, much harder than many predicted to grab a fourth successive title.

In fact, it needed a composed final leg by World individual 400m silver medallist LaShawn Merritt to get them out of  hole after he was handed the baton down in third place going into anchor leg.

USA won the gold in 2:59.31 – the slowest winning time since the USSR won the inaugural title in 1983. South Africa minus double amputee Oscar Pistorius, who was dropped after running in the heats, took a well-earned silver 0.56 down on the US. Jamaica who held the lead going into the final leg had to settle for bronze (3:00.10) – the eighth time they have taken a minor medal in this event.

The US had curiously dropped Mike Berry, who had ran a 44.0 leg and Jamaal Torrance from the heats and replaced them with  Angelo Taylor and Bershawn Jackson who had both ran without distinction in yesterday’s 400m Hurdles final.

Jonathan Borlee gave Belgium a cracking start on the first leg with Greg Nixon finishing strongly for the USA. By the time the teams broke from their lanes after 500m with the second leg runners on their way it was USA with Bershawn Jackson who led from Belgium. By the end of the back stretch on leg two the complexion of the race had changed as South Africa bolted to the front thanks to Oftense Mogawane.

Down the home straight the South African paid the price for his early pace and started to fade and Jamaica took over the lead thanks to Jermaine Gonzales, who had finished fourth in the individual 400m. After 800m it was Jamaica from South Africa with the US wallowing in third after a below par leg by Jackson.

The order of the top three remained static by the conclusion of leg three with Riker Hylton giving Jamaican anchor Leford Green a two-metre lead from South Africa followed by the US who had taken close order courtesy of Taylor.

For much of the final lap it was Green from L.J Van Zyl for South Africa, the bronze medal winner in yesterday’s men’s 400m Hurdles, tracked by Merritt. Entering the home straight the American appeared momentarily trapped on the inside curve before he was forced to swerve out beyond the Jamaican and South African to mount his attack. As if in the slipstream of a Formula One car he simply accelerated and cruised past Van Zyl to take the spoils for the USA, again. A fading Green held on from the fast-finishing Russians for the bronze.

Ironically, the times posted by the top medal-winning teams were all slower than their heat times. Pistorius may have been dropped for the final but he will receive a World silver medal as he contributed to their success with his first leg run in the heats.