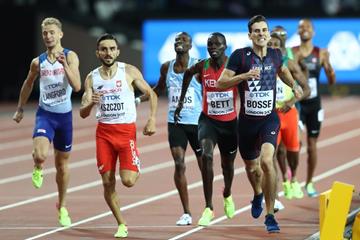 Due to a nagging injury which forced him to postpone his season’s opener until late June, Pierre-Ambroise Bosse told the French media on his arrival in the British capital he was on a course of anti-inflammatories and that he could have ideally done with at least an extra week of training in order to round into form.

But the date of the competition was set - and the competition concluded with Bosse lying on the floor completely incredulous after claiming the gold medal with a masterful last 200 metres. “Am I dreaming?” he asked rhetorically during the in-stadium interview with Iwan Thomas.

The final went out as expected with Canada’s Brandon McBride - just as he did in the semifinal -  assuming his customary position at the front, towing an already strung out field through the bell in 50.78 ahead of pre-race favourites Nijel Amos from Botswana and Kipyegon Bett from Kenya. Bosse was sixth at this point, running the shortest line on the inside.

McBride ran a hard race to qualify for the final and the front-runner began to fade down the back straight as Bosse, who has made the last three global finals, hit the front with almost exactly 200 metres remaining. Looking every bit as majestic as the reigning champion David Rudisha did in his pomp, Bett and Amos - limbs flailing everywhere - desperately led the chase but Adam Kszczot missed the break altogether and was still seventh as Bosse forged into the lead.

“I could have started to speed up a bit sooner. I lost contact and that cost me the gold,” lamented Kszczot.

Cheered on from the in-field by his long-time teammate Renaud Lavillenie who was contesting the pole vault final around the top bend, Bosse kept his form magnificently down the home straight, crossing the finish-line in a season’s best of 1:44.67 for his first victory of the season.

"I am a gambler, I love going to the casino. And today I just gambled, I put everything on the red, even my last Euro,” said Bosse, alluding to that audacious move in the last 200 metres. "I achieved this victory with a lot of determination: it was with my mind, not with my legs and not with strength."

Kszczot was finishing like a dervish but the Pole, who passed five athletes down the home straight, ultimately ran out of track but the reigning European indoor and outdoor champion added another silver medal from the World Championships to his burgeoning collection - setting a season’s best of 1:44.95 in the process.

Bett, the reigning world U20 champion - and still a junior - held on for the bronze medal in 1:45.21 ahead of another youngster Kyle Langford, fourth on home soil in a lifetime best of 1:45.25 to match the joint best finish by a British athlete in this event in twenty four years.

"I was thinking about David Rudisha before the race and I was hoping for any medal because of him," said Bett.

Amos faded out of contention in the home straight, finishing fifth 1:45.83 with McBride dropping back to eighth in 1:47.09.