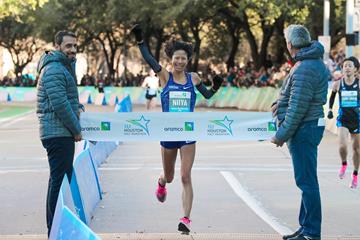 More than a decade has passed since Hitomi Niiya contested her last individual road race, but the 31-year-old produced the surprise of the day at the Aramco Houston Half Marathon, winning the World Athletics Gold Label road race in a Japanese record of 1:06:38.

Up against the likes of 2:18:34 marathon performer Ruti Aga, 1:05:07 half marathon runner Caroline Kipkirui and 2015 world 10,000m silver medallist Gelete Burka, Niiya showed no fear as she raced ahead in the early stages. She covered the first 5km in 15:37 and maintained her pace up to the half-way point, passing 10km in 31:11 with a lead of 77 seconds over a 10-woman chase pack.

Niiya’s pace dropped slightly in the second half, but she continued to extend her lead. She reached 20km in 1:03:13 with a 97-second lead and held her advantage to the end, crossing the line in 1:06:38.

Kenya’s Brillian Jepkorir came through to take second place in 1:08:08, five seconds ahead of Kipkirui.

Only marathon world record-holder Brigid Kosgei (1:05:50) and two-time world half marathon medallist Mercy Wacera (1:06:29) have ever gone quicker in Houston.

A promising junior, Niiya was one of Japan’s leading track runners for many years, reaching the 5000m final at the 2011 World Championships and finishing ninth in the 10,000m at the 2012 Olympic Games.

But after clocking a PB of 30:56.70 to finish fifth in the 10,000m at the 2013 World Championships, Niiya took a break from the sport as she was frustrated that her best was not quite good enough for global medals.

In 2018, however, and with the Tokyo 2020 Olympic Games on the horizon, she returned to racing and produced great results on the track and in ekidens. Last year she took the 10,000m silver medal at the Asian Championships and finished 11th in the same event at the World Championships in Doha.

Before today, her last individual road race was the 2009 Nagoya Marathon, where the 21-year-old Niiya recorded a PB of 2:30:58. Last week she ran 30:57 for the 10km anchor stage at the National Women’s Ekiden in Kyoto, while next week she will pace the first 12km of the Osaka Women’s Marathon.

While Niiya’s victory in the women’s race was decisive, the men’s contest was much closer as three seconds separated the top four finishers with Ethiopia’s Jemal Yimer eventually coming out on top in 59:25.

Although the pace was consistently swift throughout, the large lead pack was always slightly outside course record pace. A group of 15 men passed through 5km in 14:07 and 13 of those were still in contention at 10km, reached in 28:08.

Ten men were in the lead pack by the time they reached 15km (42:14), but five kilometres later the group had been whittled down to six: Yimer, Shadrack Kimining, Philemon Kiplimo, Geoffrey Koech, Bernard Ngeno and Abel Kipchumba.

Yimer finished second in Houston last year, just three seconds shy of victory. Although he holds the Ethiopian record at 58:33, he also owned the unfortunate accolade of being the fastest runner in history never to win a half marathon. On top of this, he has finished just outside the medals in his three appearances at global championships, placing fifth in the 10,000m at the 2017 World Championships, fourth at the 2017 World Cross and fourth at the 2018 World Half.

Today, however, he was determined to come out on top.

With just Ngeno, Kimining and Kiplimo for company as they entered the final straight, Yimer bided his time before unleashing his final sprint, crossing the line in 59:25. His time was just three seconds shy of the course record, but the Ethiopian was focused more on the victory.

In the Chevron Houston Marathon, held on the same day and in the same city as the half marathon, Ethiopian duo Askale Merachi and Kelkile Gezahegn came out on top with comfortable victories in the World Athletics Gold Label event.

Merachi was a woman on a mission, charging through 10km in 32:55 before reaching the half-way point in 1:10:10, more than two minutes clear of her nearest opponent, Canada’s Malindi Elmore.

The 32-year-old was unable to maintain that pace throughout the second half, but her two-minute lead gave her enough of a cushion over her competitors and she went on to win in a lifetime best of 2:23:29. Merachi had won the Santa Monica Marathon last year in 2:24:13 but her time was ineligible for PB purposes as it was a downhill course.

The chase pack worked together in the second half to claw back some of the deficit but they still couldn’t get within a minute of Merachi. Defending champion Biruktayit Degefa finished second in 2:24:47 while Elmore placed third in a Canadian record of 2:24:50, four seconds ahead of Meseret Belete.

By contrast, Gezahegn waited until the final few kilometres of the men’s race to make his move.

No one was able to maintain that pace in the second half, however, and the lead pack began to splinter. At 30km just Gezahegn and compatriot Bonsa Dida remained out in front. The chances of a course record gone, it was now purely a race for victory.

Ethiopia’s Derara Hurisa wasn’t considered among the favourites for the Tata Mumbai Marathon but the late addition to the field upset the odds to win the World Athletics Gold Label road race in a course record of 2:08:09 on Sunday (19).

Marathon debutant Hurisa, who also broke the Indian all-comers’ record, was rewarded with his biggest ever payday: a US$45,000 winner’s cheque and a US$15,000 course record bonus. In addition, his victory came in borrowed racing shoes.

“I mislaid my shoes while travelling from Addis Ababa to Mumbai earlier in the week so I borrowed some shoes from my friend Abraham Girma (who was also racing in Mumbai) so I only tried them on for the first time yesterday,” he said.

In a thrilling finish, three men approached the last kilometre together but Hurisa went through the gears as the trio passed that check point and he pulled away from his compatriots Ayele Abshero and Birhanu Teshome. The pair went on to finish second and third respectively in 2:08:20 and 2:08:26, with both men also inside the former course record of 2:08:35.

Prior to Sunday, the 22-year-old Hurisa’s most notable achievement was taking the silver medal in the U20 race at the African Cross Country Championships four years ago.

The men’s race started at a pace which suggested that a course record was on the cards, helped by weather that was several degrees cooler than usual. A large group of 18 men, including pacemakers, sped through 10km in 30:01 and hit the halfway mark in 1:03:52. With runners starting to regularly drop off the back of the leading pack, the leaders passed 30km in 1:30:52 with eight men still in contention at 35km.

As the runners passed the 36km marker, Teshome put his head down and started pumping his arms. Although it was a short-lived surge, it had the effect of splintering what remained of the pack. With four kilometres to go, Hurisa, Abshero and Teshome still had Uganda’s 2013 Mumbai Marathon winner Jackson Kiprop and Ethiopia’s Abera Kuma for company.

Abera and then Kiprop became detached with three kilometres to go but the Ethiopian trio stayed together until Harisa made his decisive move before going on to win in 2:08:09.

The women’s race also had an engaging story to tell with Amane Beriso coming back after a 15-month injury-induced absence from competition to win in 2:24:51.

The Ethiopian, who had the fastest PB of the field, was out of action in 2019 but she returned to top-level racing in fine style.

Despite being 38 seconds adrift of leader Rodah Jepkorir of Kenya at 30km, over the next kilometre Beriso reeled in Jepkorir and then overtook her.

Once out on her own, Beriso was never challenged and came home more than two minutes clear of Jepkorir, who crossed the line second in 2:27:14 with Ethiopia’s marathon debutante Haven Hailu third in 2:28:56.

“I was nervous to start with because I had spent so long without racing but I started to feel confident at about 31 kilometres and I was certain I could win from about 36 kilometres,” said Beriso. “With a kilometre to go, my pacemaker Sylvester Kiptoo was pointing at his watch and was telling me I could still get the course record but I was tired. I tried but couldn’t do it.”

Nevertheless, Beriso’s time is the second-fastest mark by a woman at the Mumbai Marathon and just 18 seconds outside the course record set by Kenya’s Valentine Kipketer in 2014.